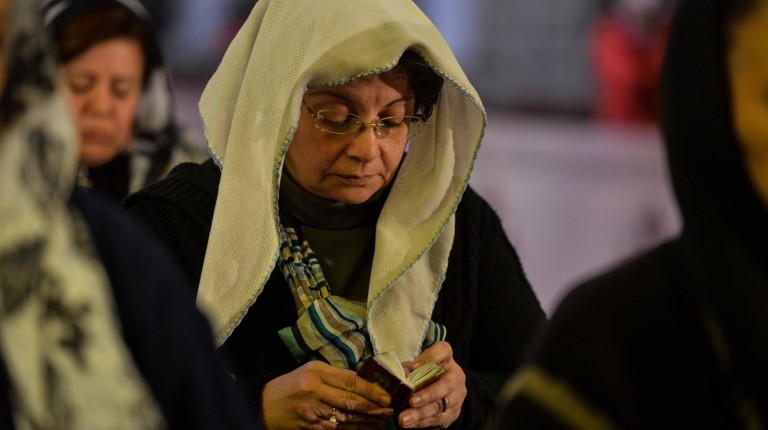 A number of political parties participated in a peaceful candle-lit rally Tuesday to honour 20 Egyptian Copts kidnapped then executed by “Islamic State” in Libya, as depicted in a video released Sunday.

The parties that participated in the rally include the Al-Taggamu, the Free Egyptians and the Conference Parties.

The rally was called for by women’s groups under the leadership of Mona Abdul Rady, senior member of Al-Tagammu Party and the independent National Front for Egyptian Women. Abdul Rady told Daily News Egypt that she tried to coordinate with most female figures of political and social forces.

With the exception of a few parties, most political forces present on the scene ahead of parliamentary elections do not seem to have an effective role in the Christian community in Egypt. This is especially true regarding the Libyan situation, which has been ongoing for over a year, with the first controversial atrocity against Copts in February 2014.

“Politicians are fighting each other over the elections despite that cooperative efforts outside the framework of the parliament can be potentially source of very achievable results on the grounds,” Abdul Rady said.

Following Sunday’s killings, all political parties issued condemning statements, declared their full support to the Egyptian state and army, and called on citizens for a “national alignment”.

Al-Taggamu member Alaa Essam added that the party contributed to a positive government decision regarding the victims’ families, such as decent financial compensation and their inclusion on the public health insurance system. Essam added that this was achieved through popular pressure, and will continue through the party’s newspaper Al-Ahly.

“Political parties will not particularly care about the issue of the Christians unless the government does, because they are all now supporting the government ahead of the parliamentary elections,” said Simon Zaher, member of NGO the Christian Egyptians Civil Rights Movement. The Movement was founded in 2011 on the grounds of fighting for the human rights of abducted Christian people, and against the marginalisation of the Christian community in Egyptian politics.

Zaher supported his argument by saying that a closer look at the timing of most parties’ press statement on the recent Libyan crisis came after the state declared an emergency situation. He added that their statements came mostly to praise the armed forces.

On the other hand, Zaher claimed leftist political parties were the most active groups, pointing out to a role he considered “significant” of Al-Taggamu, headed by Sayed Abdul Aal and the Socialist Popular Alliance Party.

“They were able to provide the families and relatives of the kidnapped with information support, something they needed the most at a time where local authorities was unable to provide any clear information on the matter,” Zaher said.

They were able to establish contacts on the ground in Libya, mainly through fellow political parties there, with Al-Tagammu hosting a meeting for the people who came from Minya to Cairo, according to Zaher.

Zaher had criticised the lack of participation of other political groups, even to support the rallies demanding rights for expats in Libya.

Some political figures attended mass funerals and met with Pope Tawadros II at Saint Mark’s Coptic Orthodox Cathedral in Cairo. On the other hand, the political parties’ narratives constantly blame the state’s oppressive tools for the weakness of their popularity. They also claim that political instability since the 2011 revolution prevented them from establishing real popular bases.