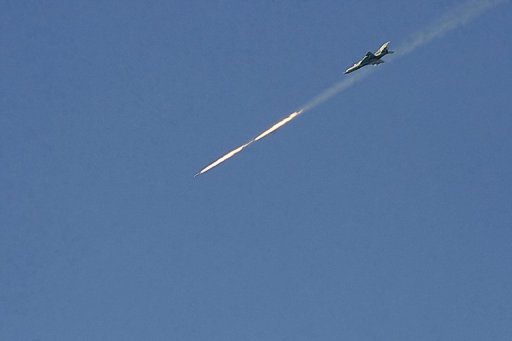 Airstrikes were launched on the Libyan city of Zintan which is allied with the internationally-recognised Libyan government and its airport, according to state-run MENA.

A plane carrying Egyptians and Libyans from the western region was scheduled to take off from the airport at the time of the attack.

The journey, which was scheduled to transport the passengers out for their safety, was cancelled as a result.

Media outlets reported that the attack was carried out by Libya Dawn militias in response to the Egyptian airstrikes on the city of Derna.

Egypt, in coordination with the internationally-recognised Libyan government in the eastern city of Tobruk led by Abduallah Al-Thinni, launched airstrikes Monday on “Islamic State” targets in the city of Derna. The attacks followed the release of a video depicting the alleged beheading of 20 Egyptian Coptic Christians on Libyan territories.

Following the attack, Omar Al-Hasi’s government based in Tripoli, opposing Al-Thinni’s government, stated Monday that four of the strikes allegedly left three children dead. The statement added that two elderly men and a 21-year-old woman were also killed, along with the destruction of a number of houses.

Libya is politically divided, with both opposing government engaged in conflict over the Egyptian airstrikes on the Libyan territories.

Al-Hasi’s government called for the UN Security Council “to take all the required measures to stop the Egyptian air force aggression on the Libyan sovereignty”, in a Tuesday statement.

It also called for the International Criminal Court to investigate the crimes against humanity in the city of Derna.

Al-Thinni’s government, on the other hand, expressed in a Tuesday statement its “concern” over the increasing terrorism in Libya, and its effects on neighbouring countries, especially as during the video, the speaker threatened the Christian population.

The statement stressed Libya’s stance in support of the Egyptian government, and it’s “appreciation” to Egypt for backing Libyans against “terrorism and extremism”. It also calls for Egypt “to continue launching airstrikes” on militants targets in coordination with the Libyan leadership.