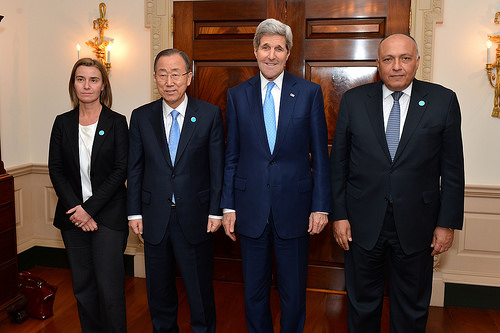 After the killings of 20 Egyptians at the hands of “Islamic State” in Libya, Shoukry headed to New York for an urgent meeting with the Libyan and Jordanian UN representatives.

Shoukry told the UN Secretary General Ban Ki-moon during the meeting that the UN shares a great responsibility towards retaining security in Libya. He said this is by empowering the Libyan government as the only legitimate authority in the country. This includes supporting them in counterterrorism acts and banning the illegal smuggling of weapons into Libyan cities.

The UN meeting was followed by a counter-terrorism summit in Washington. During the summit, Shoukry met with his US counterpart John Kerry and EU High Representative for Foreign Affairs Federica Mogherini.

He discussed bilateral relations with Kerry and other regional issues, including the situation in Libya and potential actions to counter terroristic groups, according to the Foreign Ministry’s official statement.

“This is just the beginning, to save Libya from the danger of terrorism,” Foreign Ministry spokesperson Badr Abdel Atty said in the statement, referring to Shoukry’s meeting. “It has created an international momentum regarding this issue.”

Unlike countries participating in the US-led military coalition against ISIS, such as Jordan, Egypt encountered the largest number of killed hostages by “Islamic State”, outside its borders.

A few hours prior to “Islamic State” publishing the video showing the murder of the 20 Egyptians, the Foreign Ministry released a statement. They said they were meeting with Libyan officials to “investigate the situation of the abducted workers”.

The statement raised doubts regarding the Foreign Ministry’s acquaintance with the situation in Libya. A video promotion had been posted a few days earlier by “Islamic State” activists on Twitter, showing the Egyptians in orange “execution” jumpsuits.

The Foreign Ministry endeavours towards this file in particular was widely criticised by mainstream television channels, for displaying lack of awareness of the Egyptians’ situation in Libya. Several TV hosts directly attacked Shoukry, saying: “He could not do his job.”