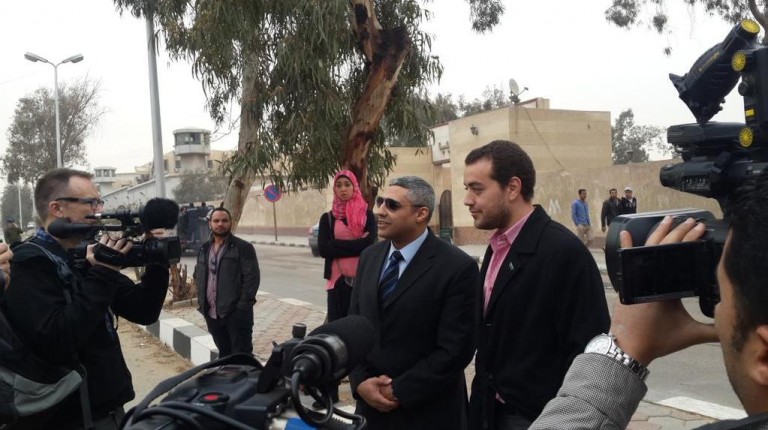 Defence lawyers for Fahmy and Baher demanded the postponement of the trial for several reasons, including calling eyewitnesses to court, after presiding Judge Hassan Farid noted the absence of two eyewitnesses.

Two security officers including one from the National Security failed to attend the court session. The defence asked the court to call in business tycoon Naguib Sawiris as an eyewitness to testify in favour of Fahmy. The defence claimed that both Mohamed’s national ID card and Canadian passport for Fahmy be returned as they are with state authorities. The judge approved their requests but will only give a scanned passport copy to Fahmy.

This was the retrial’s second hearing, as both journalists were released in the previous session, with an EGP 250,000 bail for Fahmy, although he currently holds only Canadian citizenship.

Fahmy and Baher had arrived hours before the session and spoke to journalists outside court, expressing high hopes for their acquittal through a fair trial.

“We have not done anything wrong,” Fahmy told reporters. Fahmy insisted that there should be a differentiation between Al Jazeera Mubashir Channel and Al Jazeera English. “We understand the tensions with the Qatari channel, but the case is harming Egypt’s image and we hope it ends soon,” he stated.

The journalists also said they were happy being outside prison, despite some restrictions on their movements such as travelling and having to sign in at the police station every day.

“We are not fugitives nor plan to become, we are not violent and the authorities know where to find us,” Fahmy added.

“After 411 days, I am very happy to be back home with the family, I wish I could take them for a vacation though, but anything is better than prison,” Mohamed said.