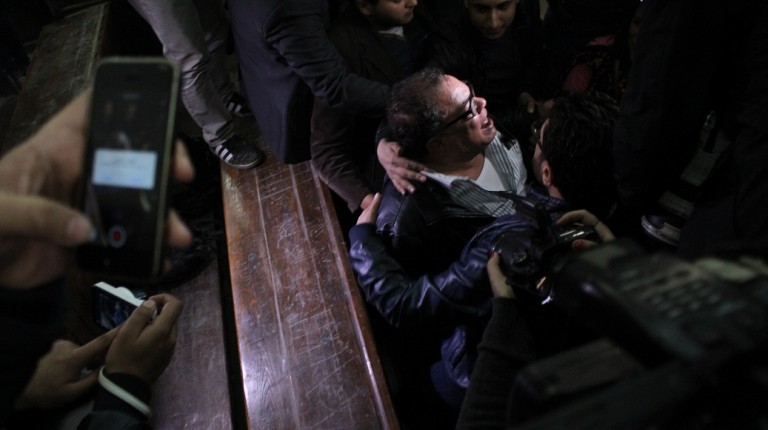 International and local entities condemned a Monday court verdict sentencing prominent activist Alaa Abdel Fattah to five years in prison and 24 others from 3-15 years for unlicenced protesting amongst other charges.

The US administration voiced concerns over Monday’s verdict.

The Cairo Criminal Court sentenced Abdel Fattah to five years in prison, in addition to an EGP 100,000 fine, for assaulting the police and illegal protesting.

Psaki also said: “We urge defendants to pursue all legal avenues to contest this verdict, including the right to appeal.”

The verdict can be challenged in front of the Court of Cassation as long as an appeal is lodged by the defence within 60 days of the verdict’s date.

Member of the defence team Mahmoud Belal noted that Monday’s verdict is final but there will be cassation.

Another defence lawyer Tarke Al-Awady said: “We were preparing for cassation even before the verdict.”

“As a matter of principle, the United States believes that a country’s long-term stability is strengthened by protecting the right of its citizens to peacefully express dissent. These sentences and others under the law have had a chilling effect on key freedoms of expression and assembly,” Psaki continued.

She added that the US administration calls on Egyptian government to “quickly complete its review of the demonstrations law and all court verdicts issued under it and to release an amended version that will enable full freedom of expression and association”.

Meanwhile, the Egyptian Foreign Ministry criticised the “comments from some countries and international organisations on Egyptian judiciary rulings”, according to a statement from the ministry’s spokesman.

The verdict was met with anger and grief from activists and relatives who attended the session and they chanted against “military rule”.

The previously in power Muslim Brotherhood condemned Tuesday the jailing of Abdel Fattah through its official English language website citing Abdel Mawgoud Dardery, the leader of its dissolved political arm.

Dardery called on “all patriotic Egyptians to close ranks, unite and complete the 25 January 2011 Revolution”.

“We should all unite to face corrupt institutions, to restore the 25  January spirit once again for all Egyptians, to chant together today once again as in court Monday, in Alaa Abdel-Fattah’s trial: “Free Revolutionaries…We Will Complete The Journey,” he added.

The Arab Organization for Human Rights (AOHR) issued Monday a statement expressing concerns over the continuity of prosecuting political opposition on the bases of violating the protest law.

AOHR described the verdict as “harsh” saying that the continuity of implementing the protest law is “disappointing”.

The organisation concluded will calls on Egyptian President Abdel Fattah Al-Sisi to use his legal authorities to and implement his promises and pardon the “peaceful political opposers”.