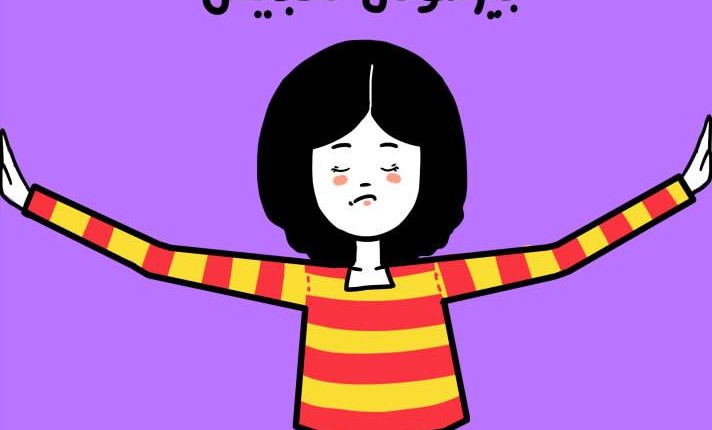 Walking down the street to the closest grocery shop is not an easy task for Egyptian women. As the number of harassment cases keeps increasing, women no longer feel safe. Many initiatives have tried to suggest various solutions to the vital issue, yet the problem remains.

A month ago, one catchy animation came to life. Meem, an average girl of no particular age or political and religious views, started speaking the minds of local women.

“Meem is like no other,” said the page’s admin, who requested anonymity. “I wanted to create a character that is funny, smart, independent and free, as I wish to see the women in Egypt. “

The page represents a new wave that fights furiously for women to break all taboos and be daring enough to express themselves, with no attention to society and its boundaries.

“I get my inspiration from some friends who are like her, some of them even get messages from people asking if they are Meem’s creators,” said the admin, an artist in her late 20s living in Cairo.

The artist wanted to stay unknown mainly to allow Meem to have her own character and views. “I started Meem so I can have another voice that is cute and charming. Also, to be more free in expressing my thoughts, as there are fewer arguments about what Meem says,” declared the admin.

The average nature of Meem allowed all women to relate to her. With no certain background she can be anyone living in Egypt. “I cannot say I was surprised about how people reacted to it. But I was very happy indeed,” said Meem’s creator.

After launching on 2 February, the page currently has 4,990 followers, which can only indicate where it will be heading in the future. “What surprised me was that it is a talking topic in work meetings and between friends. And that is what I wanted to achieve,” said the proud admin.

Meem is a result of the activists’ calls for self-defence and open-mindedness. NGOs such as HarassMap believe that the answer to the current problems lies in the hands of the women themselves.

HarassMap always encourages women to reject harassment and report the incidents to the police, the society, and more importantly their peers.

Bussy, another NGO, uses theatrical shows for the same purpose. The company roams Egypt and performs straightforward plays that narrate the difficulties real women go through.

This trend, however, does not support any physical or verbal violence. Instead, it promotes the power of peaceful expression to break stereotypes and achieve equal gender rights.

Regardless of the wave’s growing popularity, artists and activists prefer to remain unknown.

During the past month a song entitled “Hashrab Hashesh”, which is translates to “I will smoke weed”, became a big hit on the social-media platform SoundCloud.

The controversial song grossed more than 67,000 likes after being played more than a million times.

The singer is anonymous, as she chose the name “Luka” to represent herself. The lyrics cleverly note several situations that all women in their 20s go through on a weekly basis.

After relaying what mothers, grandmothers and aunts are accustomed to tell their young girls about wearing dresses and acting like real ladies, it continues to narrate what all young women hear about marriage and its importance.

However, the song’s peak is certainly the girl’s decision to smoke weed, which is largely unacceptable in the Egyptian community.

It is worth mentioning that the first reported case of harassment in Egypt was back in 2008. Noha Rushdy’s harasser got sentenced to three years in prison, and an EGP 5,000 fine. The case instantly became a public-opinion matter, and the sentence was celebrated internationally.

Meanwhile, 99.3% of women have reported some form of sexual harassment in their lives, and 96.5 reported physical harassment, according to numbers from a UN Women report.