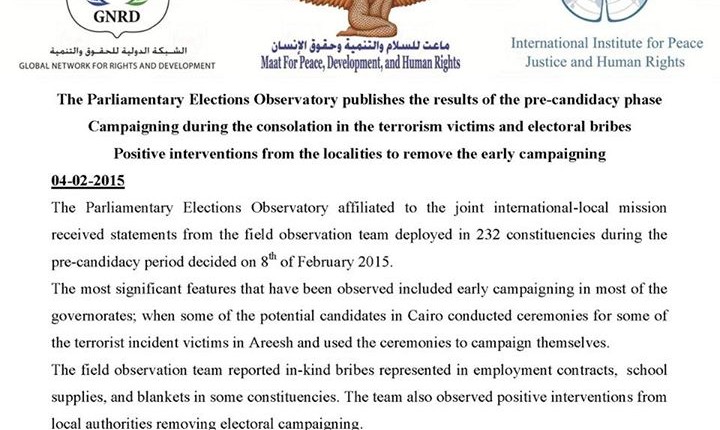 In the run-up to the parliamentary elections, an international joint observation mission hosted by locally-based Maat for Peace, Development and Human Rights has documented the pre-electoral process and potential violations.

In the past weeks, the local political scene was focused on the parliamentary election that was expected in 2015. They are now facing possible cancellation in light of a potential Supreme Constitutional Court ruling on their constitutionality. The candidacy application took place between 8 and 19 February through the Supreme Electoral Commission (SEC), formed of judges in charge of electoral affairs.

Despite the upcoming parliament now risking annulment due to constitutional concerns, some observers suggest the electoral process’ obstacles are caused by state institutions, including courts, ministries, and violations by parliamentary candidates.

Recurrent means of promotion and advertising have been used, including: press conferences promoting political parties or electoral coalitions; the appearance of some candidates in TV or newspaper interviews; including state-run papers; bribes to voters; the use of the names of certain NGOs and syndicates; and even public officials, for the purposes of propaganda.

Those acts have been reported in the media, and in a recent report summarising the events through an observational role, prepared by the international joint observation mission hosted by Maat.

Maat is working in partnership with the Global Network for Rights and Development (GNRD) based in Norway, and the International Institute for Peace, Justice and Human Rights (IIPJHR) based in Switzerland.

In the report, the observatory mission also accused some politicians of taking advantage of the execution of 20 Egyptian Copts in Libya by the militants affiliated with “Islamic State”. The report said politicians participated in the funeral ceremonies organised in Egyptian churches and appeared alongside the pope and other officials to use the photos in their campaigns.

The report also shed light on medical test requirements, a condition for candidates wishing to applyand which was added by a court decision. The tests caused several problems and even delays in the elections’ schedule. According to Maat and the international observatory mission, a large segment of young people was unable to apply due to the expenses of medical tests. The report traced a decrease in prices of medical checkups, which started at EGP 6,000, then was reduced to EGP 4,000, before finally reaching EGP 2,800 two days before the deadline.

There have been complaints the medical examination process, headed by the Ministry of Health, was not properly organised. This pushed the SEC to postpone the application deadline by two days, only for those whose documents were missing the delayed medical reports.

After the SEC closed applications, it published the names of all accepted candidates. The following week was specified for appeals by or against some candidates, first ruled by the Administrative Court then communicated to the SEC, which updates the candidates’ list accordingly.

Maat’s report also provided a brief look at the legal aspect of the first phase of the elections. It traced the SEC’s issuance of several rules based on the law defining the parliament’s division and organising candidacy requirements, and on other updates such as court decisions. It noted that the laws organising parliamentary elections are currently challenged before court for contradicting constitutional principles.

Maat and the international mission have been observing parliamentary elections since January 2015, and have issued several reports since. The mission will be deploying over 1,000 local and 158 international observers from 31 states, but said that two electoral districts (Red Sea and Matruh) will fall outside of their coverage.

Among the elections’ aspects included in their reports are the legal, security, economic and political environment, monitoring ballots during the days of the elections, and sending their recommendations to the government.