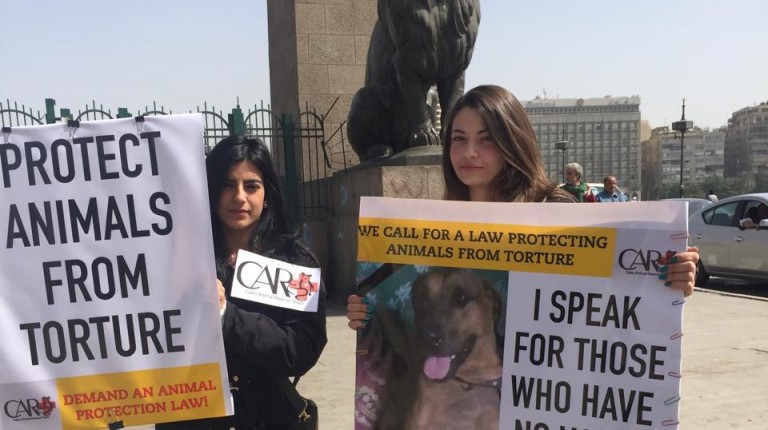 The pro-animal demonstration occurred after in a video appeared online that went viral in Cairo.

A Shubra prosecutor ordered Thursday the detention of three men who beat a strapped dog with knives and then slaughtered him, after asking the dog’s owner to give him up to settle a dispute.

Egypt’s Penal Code stipulates the punishment for killing a domesticated animal or “gravely harming it” is imprisonment for up to a year, or a fine of no more than EGP 200.

The three detainees were accused of killing the dog and possessing melee weapons. They admitted to the prosecution they had killed the dog, accusing the dog’s owner of using it to commit crimes of theft.

Lawyer Ehab Makram was the first to take legal action against the killers. The Society for the Protection of Animal Rights in Egypt met with Makram to discuss the process further.

Present at the interior ministry-approved rally was animal activist Dina Zulfikar, the Cairo Animal Rescue Team and the Egyptian Society for Mercy to Animals. The demonstration took place outside the Cairo Opera House.

Torturing animals has been a societal problem in Egypt for a long time, with even Egypt’s biggest zoo, Giza Zoo, a scene for animal abuse.