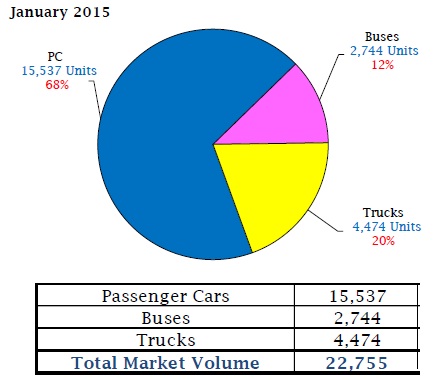 Car sales in January 2015 increased by 16% compared to the same month in 2014, according to the Automotive Market Information Council (AMIC). Cars agents and traders sold approximately 22,700 cars compared to 19,700 in 2014.

The report showed that the locally manufactured and assembled cars sales decreased with percentage amounts to 8.2% during January 22015, compared to the same month in 2014. Imported cars sales in the Egyptian market witnessed growth amounts to 48% during the same period.

The report mentioned that the category between 1500 and 1600 CC was the top-selling in the private cars market, to achieve 7,400 sold cars with 30% growth than the same period in 2014. The report said the locally manufactured and assembled cars sales witnessed reduction with percentage amounts at 14.4%, and in contrast, imported private cars sales increased 50.4% compared to January 2014.

The sales of locally manufactured buses also grew by 3% compared to 2014, in addition to imported buses which grew by 69%. This is besides growth in the locally assembled trucks sector at 1.3% and imported trucks at 5.3%.