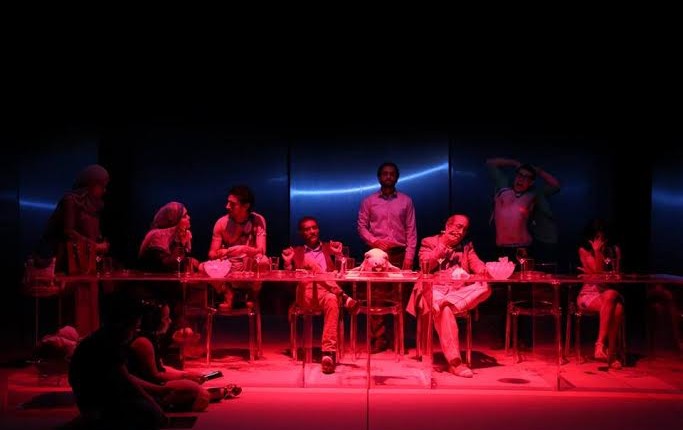 “The whole point is that there’s no point,” Ahmed Al-Attar says of his latest play “The Last Supper”. With all due respect to Al-Attar, I beg to differ.

The play debuted with great success, both internationally and locally, with an initial 15-minute segment performed during last year’s Downtown Contemporary Arts Festival (DCAF), another brainchild of Al-Attar’s. He then went on to debut the full 50 minutes in November in Egypt, followed by a show in Marseille.

The latest showing in February was in Falaki Theatre (a few steps away from Mohamed Mahmoud Street), after which it will move on as the official selection in the Festival d’Avignon.

On the surface, the play verges on the nonsensical. It is near impossible to follow every “conflict” and conversation taking place on stage: family members walk in and out, arguments erupt over seemingly nothing, and the main characters are exceedingly vapid. Moreover, between every act, the scene freezes in seemingly random – although arguably deeply revelatory – positions as the carcasses of (sacrificial) animals descend on the dinner table.

However, contrary to the seeming futility of it all, and while the endless chaos and cacophony take centre-stage, oftentimes verging on the unbearable, there are other, more nuanced elements at play throughout.

No doubt Al-Attar is never overbearing by any means; if five different people were forced to pick out one narrative thread, they would pick out at least five different threads, and probably more – or none at all, if one is to follow through with Al-Attar’s logic (or illogic).

In any case, there is no narrative imposed. But if one is to assume that each play tells a story, perhaps only one thread presents itself as a coherent “narrative”, so to speak.

While Al-Attar maintains that the play did not begin or end at a particular point for any particular reason, and “could have gone on for another hour and a half” potentially, he nonetheless concedes to the fact that the overarching conflict that sets the play in motion is the class conflict – paralleled or contested only by the gender conflict.

As such, I’d like to pose three protagonists – vaguely blasphemous and blatantly presumptuous as it may be – the “help”. In that sense, Hassan, played by Ramsi Lehner, is the antagonist – though perhaps the opposite could also be true. If class struggle is indeed the thread we choose, Hassan is the one who consistently drives it forward, and the play can as such be seen as a long drawn out conflict.

Nonetheless, it is noteworthy that the servants are the first three to appear, despite their peripheral position both on the stage and in the “narrative”.

But the conflict is never ever resolved. If it’s a black comedy, as Al-Attar also posits, it’s one with no end – one that perhaps only finds its end with the end of humanity itself.

Lehner’s portrayal of Hassan, surrounded by the help, is the underpinning of the play – its insidious subtlety is perhaps one of the most coherent narrative lines that can be traced throughout the 50 minutes.

Hassan fancies himself a rebel philosopher – an artist of sorts – but in outwardly and superficially attempting to subvert the status quo, he only ends up being its most violent upholder.

The General (Sayed Ragab) – whom Al-Attar reluctantly poses as a potential protagonist in our conversation, as “he’s the one who comes late; he gets the central position, he’s not part of the family” – is reduced in this case to no more than a scarecrow, spouting off the empty and ridiculous mantras of the bourgeoisie. He is the protagonist of vapidity, and the “emptiness” which Al-Attar attributes to the emotions and conflicts of the play if you will.

“In the end, there’s no substance in any of [the character’s] emotions,” says Al-Attar.

Substance only arises in the tensions between class, and (perhaps by extension) gender.

The General’s “cockroaches, cockroaches”, in reference to the servants, tames next to Hassan’s profession of his desire to have sex with his maids – to rape them, taking a specific and pronounced pleasure in holding them down as they struggle, his eyes gleaming with pleasure as he recounts the scene.

It is only when The General echoes Hassan’s desire by saying: “They all want it – and when they say they don’t want it, they mean they really want it”, that his presence becomes truly disturbing.

Throughout the remainder of the play, he seems to serve more as a patriarchal figure – more so than the actual patriarch himself (played by Boutros Boutros-Ghali).

The servants, on the other hand, remain active on the peripheries of the scene, as well as the remaining family members’ lives throughout the entire play, only being acknowledged in passing throughout the whole play, and only to fulfil their role of subservience.

Two scenes stand out in this case: Hassan’s pursuit of the nanny, played with compelling subtlety by Mona Soliman, and the confrontation with The Butler (Mahmoud El-Hadad).

The Butler emerges as the most “aggressive” of the servants, yet the height of his aggression – and perhaps the climax of the play, if one can presume a climax – is when he grabs the grandson’s (Hassan’s son’s) wrist to stop him from hitting him.

Hassan’s son, in this case, serves as one of Hassan’s vehicles in his constant aggression against The Butler. He is promoted from the floor to the dining table one he is “used by his father to assault the butler”.

But perhaps the most elusive and overbearing figure in the play is the absent matriarch. Of her, Al-Attar tellingly says: “I think in some sense, analysing myself and my own thoughts, I think I put a lot of blame on the mother, and I also put a lot of hope on the mother. Because the absent is the hope in some sense. She’s the (potential) salvation of this disaster, and she’s not there, so they’re endlessly in this [loop]. The only one who can break that is the mother.”

However, the mother could also be the opposite, “in the fact that she’s not there, so she’s really not effective at all. It’s two extremes. On one side she can save everyone, and on the other she can just let everyone down, which is the case right now.”

Her absence is the only precarious and ambiguous contest to the violence of the play – and in that sense she is perhaps the absent protagonist.

As for the remaining characters, they are not bound by the same limitations – they are at once caricatures, as well as being in a sense more real than reality. All the amplified characteristics serve to streamline and uphold the point that Al-Attar is, in fact, trying to make.

Near the conclusion of our conversation, Al-Attar notes: “I guess I’m in all of [the characters]. But yes I think [Hassan] is a caricature of me, in some sense. I hate the concept of the rebel, clever artist. I try to break that down as much as I can.”