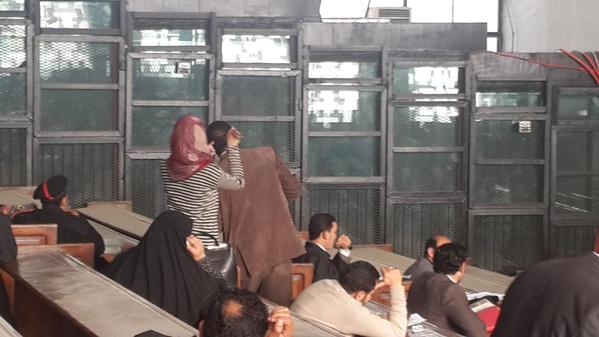 Qasr El-Nil Misdemeanor Court adjourned to 10 March the trial of 68 defendants on protest charges, due to disputes that erupted between regular and human rights’ lawyers during the session held Tuesday at Tora Police Institute.

A total of 80 people were arrested in protests on 25 January which marked the fourth anniversary of the revolution. Among them, 12 minors were previously acquitted, and the remaining 68 include one young woman, defence lawyer Sameh Samir told Daily News Egypt.

Lawyer Mohamed Fathy added he was defending three people including two 19-year-old men and 21-year-old Abdul Rahman Tarek, a member of 6 April Youth Movement. Tarek was sentenced to 15 years in prison in absentia in the Shura Council case, because the Ministry of Interior failed to bring him to court to attend his session.

Several rights lawyers agreed to coordinate defence arguments by dividing the defendants among them. Samir was the first one to make his claim for four defendants and argued that the conditions of their arrests and detention were illegal.

Samir said security forces detained the protesters in a Central Security Forces (CSF) camp which is not a legitimate detention place. “They disappeared for two days and were not granted the right to a lawyer or even call a relative,” Samir said.

“They were questioned under those circumstances, without our presence, despite that security forces noted that the lawyers were waiting outside but prevented them from entering,” he continued. Samir also argued that the police and prosecution reports’ contained conflicting information about the time of the arrests on that day.

Samir, a member of the independent Front to Defend Protesters, was followed by fellow rights’ lawyer Mokhtar Mounir who showed the judge a copy of a newspapers in which an article was published Tuesday about the Prosecutor General’s decision to release 120 detainees for bad health conditions.

Mounir said that one of the defendants in the case was included in that list. Defence lawyers said prosecution claims were inconsistent with the events of the protests, the times of arrests, evidence presented, and locations of the protests.

“Many of them are injured, without an arm or a leg. They were demanding retribution to the martyrs and injured of the revolution after four years of not obtaining any,” Samir claimed, adding that protesters have the right to chant for or against whomever they wish, especially on such an occasion.

However the session was interrupted because some of the defendants had hired more than one lawyer, which pushed those lawyers to object the space given to rights’ lawyers and asking to step in as well. The judge adjourned the session for five minutes to give them time to sort the issue out.

After lawyers could not settle the conflict, the judge adjourned the case. The female defendant in the case yelled from behind bars at the lawyers saying “I don’t want you, I don’t want any of you!”

Lawyers met with the families of the defendants outside court and asked them to chose which lawyers they wanted, adding that prominent rights lawyer Khaled Ali will attend next time, willing to take defendants who have no lawyers, provided he is their only defence.

Families reactions’ were calmer than expected and many supported the human rights’ lawyers.

An EU representative and a lawyer attended the trial to monitor the process but were not authorised to speak to the press. Families of the defendants had arrived to attend the session around 10am at the Police Insititute of Tora but were not allowed inside court until the trial started at 4pm.

One young woman managed to get in for having a lawyers’ card. “My 19-year-old brother is among the defendants and was arrested during protests in Ramsis,” she briefly told Daily News Egypt.