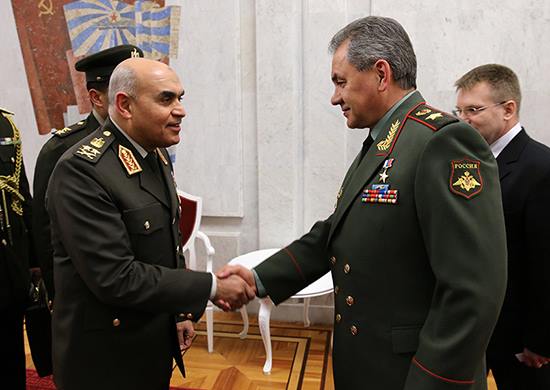 The talks focused on military and security cooperation between both countries, as well as exchanging competencies in several other fields, the statement added.

Meanwhile the Russian state news agency Russia Today reported Tuesday that Egypt and Russia have agreed in the talks to hold a joint naval drill in the Mediterranean Sea.

The report quoted a Russian defence ministry statement saying: “The parties agreed to continue the practice of inviting Egyptian military to Russian exercises in the capacity of observers, and also to hold a naval exercise in the Mediterranean this year and an anti-terrorist exercise of rapid reaction forces.”

The Egyptian military spokesperson mentioned no further details on the kind of cooperation agreed upon, and referred to the information provided in the official statement.

Sobhi had left Saturday for the Moscow, leading a high army delegation in an official visit to hold “important negotiations” with high Russian army officials.

“Egypt is an important partner for Russia in the Middle East,” the Russian minister said. “Fighting terrorism in Egypt will not only serve Egyptians, but also other countries in the region as well.”

Meanwhile, Sobhi said: “Egypt appreciates the Russian stance in supporting its efforts to maintain security and peace in the Middle East.”

Al-Sisi has improved relations with Russia since rising to power after the ouster of the Muslim Brotherhood government and former president Mohamed Morsi in July 2013. He has paid two visits to Russia, first as defence minister then as elected president in 2014.

In his earlier visit in February 2014 as defence minister, Al-Sisi and Putin agreed on a $3.5bn deal. The deal will see Russia provide Egypt with MIG-29 fighter jets, Kornet anti-tank missile systems as well as MI-35 helicopter.

In February, President Vladimir Putin announced the two countries had signed a number of agreements after a meeting with Egyptian President Abdel Fattah Al-Sisi in Cairo.