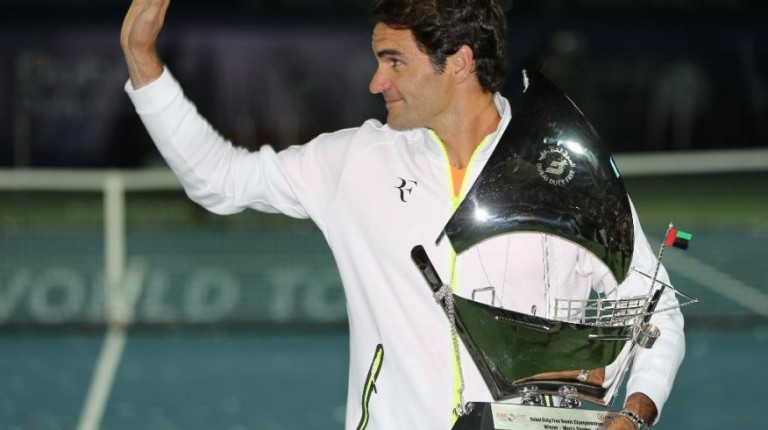 The Swiss player, Roger Federer, who is ranked 2nd on the ATP, won the title of the Dubai tennis championship, which fall within the ATP competitions of 500 points, after winning against the holder of the No.1 spot in the ATP rankings,  Novak Djokovic, in the final game with the scores 3-6 and 5-7.

Federer, holder of 17 Grand Slam titles, denied his competitor, Djokovic, from winning his second title for the year, after  being crowned the title of the first Grand Slam championship of the year; the Australian Open Tennis Championship.

Federer’s path to the title began with winning against the Russian Mikhail Youzhny in the first round, then surpassing the Spaniard Fernando Verdasco in the second round of the championship. In the quarter final, he defeated the French Richard Gasquet after only one round when the French player withdrew for injury. Federer was able to easily defeat the 18 year old Croatian Borna Ćorić in the semi-final with scores of 2-6 and 1-6.

Djokovic’s path to the final witnessed an easy win against the Canadian Vasek Pospisil. He then surpassed the Russian Andrey Golubev in two consecutive groups. In the quarter finals, he defeated the Turkish Marsel İlhan with 1-6 and 1-6. His strongest game besides the final was with the Czech Tomas Berdych, who is ranked 8th in the ATP in the semi-final with scores of 0-6, 7-5, and 4-6.

In the women’s competitions, Simona Halep, ranked 3rd in ATP, was crowned the title of the Dubai singles women championship after winning against her Czech rival Karolína Plíšková, in the finals by 4-6 and 6-7.

Simona Halep won four games other than the final, the first of which was in the second round against the Slovak Daniela Hantuchová. In the third round, she achieved her second victory over the Bulgarian Tsvetana Pironkova by 4-6 and 3-6. Her third win was at the expense of the Russian Ekaterina Makarova in the quarter final by 3-6, 6-1, and 5-7. She then won her fourth game against the No.5-ranked Danish Caroline Wozniacki in the semi-final by 6-2, 1-6, and 1-6.

Meanwhile, the Czech Lucie Šafářová, ranked 15th in the ATP, won the title of the Qatar Open tennis tournament singles women’s competitions at the expense of the Belarusian Victoria Azarenka, after Šafářová settled the final game with two consecutive groups with the scores 4-6, 3-6. Earlier in the competition, Šafářová surpassed the Australian Samantha Stosur, then defeated the Russian Ekaterina Makarova, and in the quarter finals won against the German Andrea Petkovic to reach the semi-final against Spaniard Carla Suárez Navarro, which she won by 2-6 and 1-6.

Victoria Azarenka’s path to the finals was full of surprises, as she won against the German Angelique Kerber in the first round, and then surpassed the Ukrainian Elina Svitolina. In one of the championship’s surprises, Azarenka was able to defeat the No.5-ranked player Caroline Wozniacki in the quarter finals by 3-6 and 1-6. In the semi-final, Azarenka triggered another surprise when she won against the American Venus Williams by 6-2, 2-6, and 4-6.

In the women’s doubles, the American duo Raquel Kops-Jones and Abigail Spears were able to win the title of this year’s Qatar Open, after they won the final game against the team bringing together the Taiwanese Hsieh Su-wei, holder of last year’s title, and her mate Indian Sania Mirza in two rounds, with scores of 4-6 and 4-6.