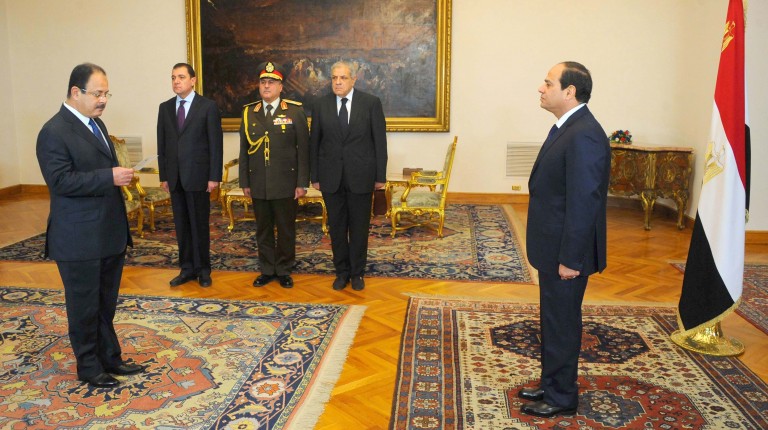 The newly appointed Minister of Interior Magdy Abdel Ghaffar, who used to head the ministry’s intelligence agency, has a history that reminds of the infamous Mubarak-era minister Habib Al-Adly.

Abdel Ghaffar, 62, joined the dissolved Sate Security Agency (SSA) in 1977, a body that was mainly in charge of controlling opposition and maintaining political security for the regime. He served almost his entire career in the agency, holding different positions over his career.

After the 25 January Revolution and the toppling of former president Hosni Mubarak, the SSA was dissolved and a new agency, called the National Security Agency, was established in March 2011.

Abdel Ghaffar was appointed head of the new agency in December 2011, and had already spoken in the media about his view of the agency’s role after the Revolution.

He said in a TV interview with Al-Hayat satellite channel in June 2011, while he was deputy director of the agency: “The National Security Agency is the legitimate son of the 25 January Revolution.” He admitted, however, that there were “violations” made by the former regime’s security agencies.

He added that surveillance on phone conversations and other condemned acts of the agency under the former regime will not happen under the new agency. He asserted that any surveillance will be authorised from General Prosecution.

The unending flow of leaked phone conversations between political opposition figures, activists, and even the state’s top leaders, suggest a different reality, however.

Al-Adly was the latest minister of interior to come from the ministry’s intelligence body. His stint in the ministry was marred by human rights violations that participated in agitating popular fury that led to the 25 January Revolution.

One of the last of these violations was the torturing and killing of Sayed Belal, who was held by the SSA for investigations of an attack against a church on New Year’s Eve in 2011.

Abdel Ghaffar was a witness for the SSA officers’ defence, with the officers receiving prison sentences for killing Belal.