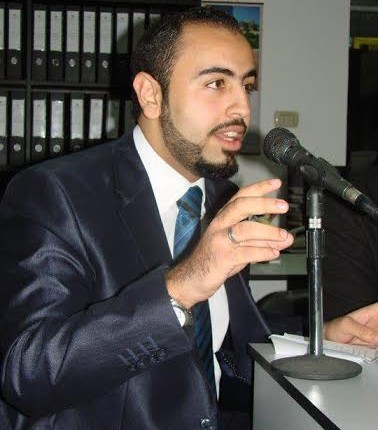 Although born and raised in Jordan, writer Hassan El-Halaby was always attached to the Egyptian mystery and science fiction literature and its leading icons including Dr Ahmed Khaled Tawfek and Dr Nabil Farouk. After finishing his English Literature studies, he turned to work in various Online Marketing projects; however, he could never forget his deep-rooted passion for reading and writing.

In 2011, El-Halaby published his first short story collection “Because you’re Dead, my Dear Wife” after long struggles with publishing houses in Egypt and Jordan. Within the same year, he published his second collection “The Owl and Other Stories”.

Because he always had a dream of being one of writers amongst the pocket novels published by the Modern Arab Association for Printing and Publishing, he turned to writing his series “Taxi” that achieved great success.

In 2014, publishing El-Halaby’s first romantic novel “Mostahela” was an important turning point in his literary history as it attracted large numbers of young readers and was ranked among the bestsellers. In 2015, he moved to provide some philosophical mediation and contemplation in an ironic way in his outstanding novel “A Man Who Hates Shoes”, aiming to portray the miserable life of the bootblack who is waiting for a miracle to change his pathetic circumstances and austere life.

In an interview with Daily News Egypt, the Jordanian writer gave profound analysis for the book market in his homeland Jordan, revealing some secrets about his upcoming literary works. He also replied to some of the criticism raised around his novels and short stories.

When did writing start dominating your life? And does it have anything to do with your childhood?

I believe that writing talent is always associated with the childhood stage in a way or another. When I was a little child, I used to read a lot. I was a big fan of the pocket novel. My parents also played a crucial role in encouraging me to read different genres of literature. Until now, I try to read anything and everything that falls into my hands.

Do you have any special rituals during writing (like staying in certain places, eating or drinking any particular thing)?

Before marriage, I used to write anytime, everywhere. I used to write in the bus, home, university or even in the streets, and I didn’t have any specific rituals to help me concentrate more. However, nowadays, noise became one of the biggest obstacles as it prevents my ideas from flowing properly, so I have to choose a quiet place to be able to work better.

How did you prepare for your two first short story collections “Because You’re Dead, My Dear Wife” and” The Owl “?

In fact, I used to read a lot and write a lot. From time to time, I had to filter the stories I wrote and that’s how the whole thing started. I realised that I have enough number of short stories that can be published in two collections. So I decided to release one of them in Egypt and the other one in Kuwait.

What are the main messages you wanted to convey through these collections?

I just write for the sake of entertainment and killing boredom! I always believe that my mind could explode out of the huge number of ideas that always occupy it, and that’s why I always prefer to get these ideas out of my mind turning them into words, stories and novels. I’m not a prophet and I’m not an advisor to claim that I have important messages I intend to convey to my readers to help save their lives. No, I just try to inject my sentences with positive ideas that sometimes please my readers! I’ve never thought of it from the perspective of trying to send certain messages and I’ve never planned for that before writing.

What are the main obstacles you encountered when you decided to publish those first collections?

When I decided to publish my first collection “Because You’re Dead, My Dear Wife”, I realised that the publishing house I dealt with were so greedy as it didn’t care for anything except money. They gave me the printed copies of the novel back and didn’t want to distribute it in Jordan or any other Arabic country! When I released this collection in Egypt, I couldn’t pay high attention to it because I live in Jordan, and it was so hard for me to take good care of it. My second novel “The Owl and Other Stories” was released in Kuwait and could achieve good success and we released the second edition within less than a year. Although, it had high circulation and readership rates in Gulf countries, it wasn’t distributed in Egypt or Jordan which annoyed me a lot.

When did you decide to publish the “Taxi” series? And how do you evaluate such experience?

The “Taxi” series was one of my childhood dreams. I was brought up reading the novel series of “Ragol El-Mostaheel”, “Malaf El-Mostaqbal”, “Flash”, “Ma Waraa El-Tabe’a” and many others. It was always a big dream to meet the writers of these series and make them read one of my novels. Thank God the experience is just perfect! I exerted a lot of effort to achieve such dream and thank God I can maintain a good relationship with most of the writers and readers’ feedback always make me proud.

After presenting a dose of crime, suspense and science fiction in your previous novels, you moved to a completely different genre of romantic literature in your novel “Mostahela” (“Impossible”), which is considered an important turning point in your literary history. Why did you turn to writing such literature with this novel? And what was your inspiration?

All the events and incidents in my novel “Mostahela” have been roaming inside my mind for long years, but I took my time to write it in a good way to add something new every time. I was actually inspired by many things in my life, things I witnessed, watched, read or loved because I’m always convinced that the writer must insert issues and subjects from his own life in his writings.

In spite of the outstanding success of the novel, it raised waves of criticism as many people accused it of prolongation, sexual implications and excessive usage of quotations. How did you receive such criticism and how did you justify it?

Like any other novel in the world, my novel attracted its haters and lovers. When you surf the Goodreads website and read people’s reviews about the successful bestseller novels, you’ll find people who adore it as well as those who violently hate it. People who say that the novel is full of sexual implications didn’t read it! There are some implications of course, but they are very important as they justify the horrible things that happened with the main character. My novel doesn’t talk about outer space where the evil empires and laser swords exist! It is a realistic novel that portrays the real life with its different dimensions including love, hatred and sex!

As for the large numbers of quotes, I think it’s a double edged sword, as some people saw it as very beautiful as it completed the events of the novel while others saw it very terrible on the contrary! I respect both points of views, and I’ll be trying to improve my writing over time as much as possible as I always say.

The open philosophical ending of your last novel “The Man Who Hates Shoes” was shocking for most of the readers. How do you illustrate such an ending? And what were your main objectives behind writing such novel?

The ending of the novel had to be like this. I knew that this ending was going to annoy a lot of people, but the understanding of the whole novel is derived from the dedications written on the first pages. The main message the novel includes is “don’t wait for anyone to help you improve your life. Do everything by yourself and don’t depend on anyone else. Just depend on yourself!”

Who are your favourite writers?

I have a long list of favourite writers because I’m a big fan of reading books and novels, may be more than the writers themselves. I can write dozens of names right now but I can never deny being influenced by the writings of Ahmed Khaled Tawfek or Nabil Farouk at early stages of my life and I’m so proud of that.

From your own point of view, what are the main problems that face the Arabic book market nowadays? Is the situation here in Egypt different from Jordan or Lebanon?

I think the most important problems are always associated with the distribution that all writers suffer from as well as the lack of readers. The situation in Jordan is disastrous, because of the very low distribution rates. Also, the costs of publishing are high in a very provoking way, although the only service presented by those publishing houses is only publishing the books. Unfortunately, I think I won’t be able to publish any other book in Jordan throughout my entire life unless I’m the owner of the publishing house.

What are your future projects or literary works? And have you ever received any offers to turn your novels into films or plays?

We have many ideas, a new series with the association and a huge horror novel of many parts whose incidents will take place in the future. Actually, I have many ideas but I don’t know when to start. As for the cinema and theatre offers, I haven’t received any offers till now and I wish I won’t receive such offers ever.