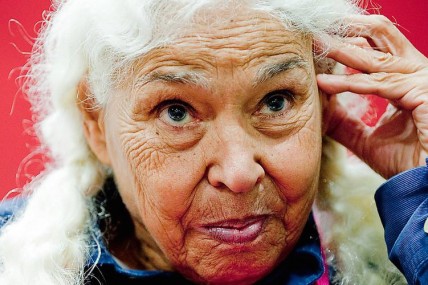 She is very well-known within the Arab world and is viewed as an “outspoken Egyptian Feminist”. Nawal El-Saadawi has been described as a courageous woman who has always swum against the tide. She studied medicine, but chose to champion women’s rights instead.

The journey she embarked upon was not smooth. She was sentenced to three months in prison in 1981. Yet, prison did not get her spirits down. She used toilet paper and pencil to write her memoirs. True to form, the government did not tolerate her views.

Threatened by Islamists, El-Saadawi fled Egypt and eventually immigrated to the United States in 1993. When she returned to Egypt a decade later, she fearlessly proclaimed: “I think feminism covered all matters related to the social justice, political justice and gender equality. Feminism describes the relationship between medicine, psychology, history, literature and politics. Women’s oppression cannot be understood properly without any feminist approach.”

Some fifty of her published works include novels, plays and political texts. Perhaps, she is best known for her book, Memoirs from the Women’s Prison. Through her works, she addresses domestic violence against women, prostitution, and religious fundamentalism.

El-Saadawi suggests that she chose to be a writer rather than being a housewife, and criticises the ruling patriarchal societies throughout the Middle East. She opposes the Muslim Brotherhood and their supporters and calls them “reactionary” and “backwards”, whose existence is harmful to society and politics in Egypt. She believes that the fall of Islamist president Mohamed Morsi’s government in June 2013 was not due to a military coup, but it was the result of the will of the people.

El-Saadawi argues that the events that led to Morsi’s downfall are a continuation of people’s aspiration of the 2011 revolution. El-Saadawi is very optimistic about the future of Egypt. She believes that the will of the Egyptian people is to save them from “capitalism”, “foreign imperialism” and “religious fundamentalism”. Her “anti-imperialist” and “anti-colonial” views reflect the nature of an “enlightened Middle Easterner” with an intellectual heritage and an appreciation for Karl Marx.

While studying in the US, Abdel Fattah Al-Sisi wrote an article that posited the need for compatibility between democracy, religion and tradition. With regard to this issue, are you concerned about the future of Egypt and in particular, women’s rights and educational freedom? Do you think Al-Sisi has had an effect on individual liberty and social freedoms post-Mubarak?

It is better to ask me about the dangers facing Egypt from Islamic fundamentalism and from external powers. We had two revolutions to liberate Egypt from both global and local powers, from powers using Islam to divide our country. This is the real danger facing Egypt.

What do you think about the issue of Egypt’s relations with both the US and Israel in the Al-Sisi era?

We still live in a world that is dominated by the West. Unfortunately, El-Sadat had turned Egypt into an American colony. Egypt needs to stay out of the influence of the great powers – whether it is the United States or Russia. Achieving self-reliance is a must. In the aftermath of the two revolutions, we have realised that the attainment of justice, freedom, and dignity is our ultimate objective. I am optimistic about Egypt’s future: we will win. A strong Egypt will forge relationships with foreign powers based on dignity and equality.

As you know Sweden has recognised Palestine as a state. Palestinian recognition is growing among Europeans. What is Egypt’s approach to this issue? What is the Egyptian government’s approach to Palestine?

The Egyptian people have always supported an independent Palestine. However, it is not enough to recognise Palestine as a state. The global community must [also do so].

In your view, do you think the Muslim Brotherhood can use what happened in Tunisia as a template in Egypt?

Tunisia’s Ennahda party may be better than the Muslim Brotherhood, but I don’t trust any political party that rides on religion to gain power. We need to separate religion from politics.

What is your prediction about the upcoming elections?

Personally, I don’t trust democracy, which is primarily based on so-called free elections.

What has been the effect of the Arab Spring on Egyptian women? Do you see any change in women participation in social and political activities? What is the situation of employment for women?

I never lose hope. Women are losing, yet are moving forward at the same time. It is a perennial battle to transform a patriarchal religious system. The El-Sadat and Mubarak governments clamped down on the Egyptian women’s movement. However, we now have women in the government. Besides, there are female-run NGOs. The future will be better than the present or past. We have to keep in mind that the backlash against women’s rights is universal and not limited to our country. Let the fight continue.