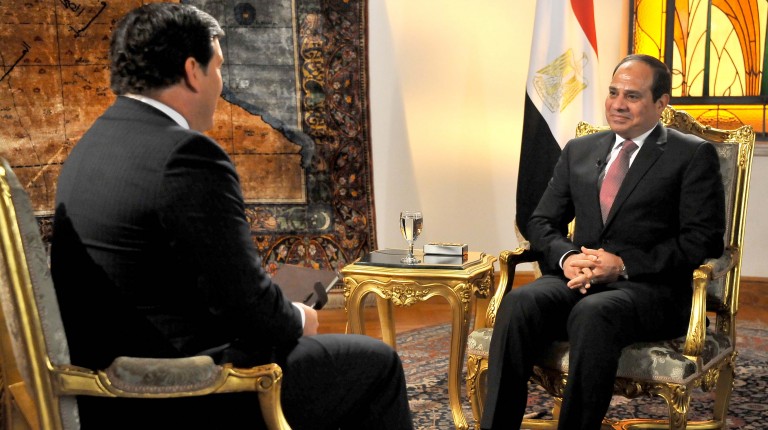 US TV channel Fox News aired an exclusive interview with President Abdel Fattah Al-Sisi Monday, in which they discussed the US position regarding Egypt in the ongoing fight against regional threats.

Al-Sisi welcomed the US’s support towards the creation of an “Arab ready force” to fight the “Islamic State” (IS) and similar groups. He said the “ready force” could include Saudi Arabia, the UAE, Kuwait, Bahrain, Jordan, Egypt and others. “The map of terrorism and extremism is expanding, not recessing,” said Al-Sisi.

The beheadings of 20 Egyptian Copts in Libya at the hands of IS prompted Egyptian airstrikes on IS targets. After the beheadings, Al-Sisi urged the United Nations Security Council (UNSC) to adopt a resolution authorising an international military intervention in Libya.

“It is very important for the United States to understand that our need for the weapons and for the equipment is dire, especially at the time when the Egyptians feel they are fighting terrorism and they would like to feel that the United States is standing by them in their fight against terrorism,” Al-Sisi said during the interview.

Egypt has been heavily reliant on US military aid for its weapon supply. The aid was partially cut after the ouster of former president Mohamed Morsi on 3 July2013, but was recently restored.

The president openly stated that the suspension of US equipment and arms to Egypt gave a “negative indication to the public opinion that the United States is not standing by the Egyptians”.

When asked directly about US leadership in the region, Al-Sisi paused and responded briefly. “Difficult questions,” he said, adding that the “region is facing very tough circumstances” and “the public opinion wants to see a big response from capable countries”.

Al-Sisi acknowledged that the 2012 presidential elections that brought Morsi to power were “free and fair”. However, regarding the characterisation that Morsi’s ouster was a “coup”, he claimed that it was necessary since the country was headed towards a “vicious cycle of civil war”.

The US-Egyptian ties have been strained since the removal of Morsi and the arrival of Al-Sisi to power. The Pentagon recently described it as a “complex relationship”.