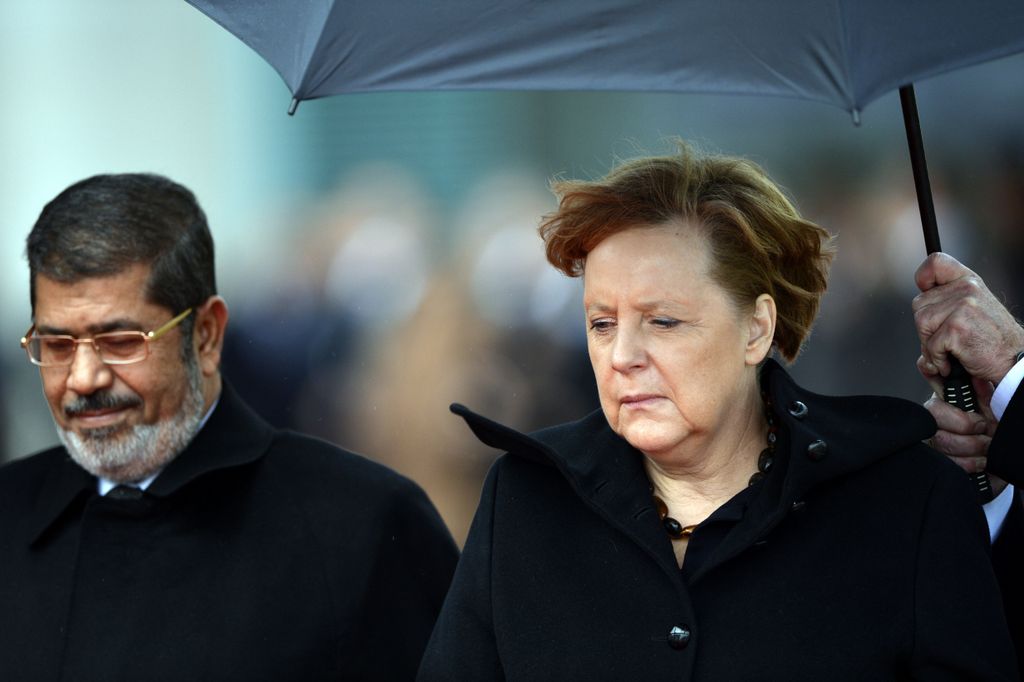 In a surprise move of transparency the German government has disclosed a list of all the arms exports from Germany since 2002. The socialist left party Die Linke had demanded to know what arm sales had received clearance by the governments of both the social democrat Gerhard Schröder and his successor Angela Merkel from the Christian Union (CDU). The question of arms sales has become a highly disputed topic in Germany’s political debate as the opposition is criticising that Germany is the third biggest arms exporter of the world and the fifth biggest supplier of arms to the Middle East.

This weekend the Vice Chancellor of Germany, Sigmar Gabriel (SPD), travelled to the Middle East to discuss economic ties but also the export of arms to Saudi Arabia with the rulers in Riyadh. In his opinion arms sales to the Saudis, temporarily halted by him in January, should not continue. Members of Mrs. Merkel’s party (CDU/CSU) reject the idea and are of the opinion that selling weapons to countries of the Middle East must be regarded as a “vital and legitimate tool” of Germany’s foreign policy. The Greens in the meantime called on the German government to stop selling arms to Saudi Arabia once and for all in the light of Saudi Arabia being the “top terror exporter in the Middle East”.

The list of arms exports by Germany since 2002, which has now been disclosed by Gabriel’s Ministry for Economic Affairs, is shedding new light on how deeply Germany has been and is involved in supplying authoritarian regimes the world over with arms ‘Made in Germany’. Especially troubling in this context are the exports to Saudi Arabia, the United Arab Emirates and Egypt both prior and after the violent oppression of peaceful uprisings that killed more than thousand unarmed protesters. Egypt’s successive regimes under Mubarak, the Supreme Council of the Armed Forces (SCAF), Morsi and now Al-Sisi have allowed continued violent and lethal attacks on its citizens.

Saudi Arabia, though not involved in combatting uprisings within its own strictly ruled territory, together with the United Arab Emirates came to the aid of neighbouring Bahrain in March 2011, to crush a peaceful protest in the capital Manama. Both Egypt and Bahrain, the latter with the support of the dominant Saudi Arabia, have violated international laws and human rights and showed no restraint when it came to using deadly weapons on unarmed protester.

That Germany, respected for its democracy and the non-violent revolution in East Germany in 1989, should supply weapons to countries willing to crush peaceful dissent by brutal force is both troubling and in contradiction with the guidelines set down for arms exports by German weapon manufacturers. In Germany the export of arms into regions of conflict is subjected to restrictions and requires clearance from a Federal Security Council comprised of the chancellor, the vice-chancellor and six ministers of the coalition cabinet who come to their decisions in secret meetings.

In answering questions by the opposition group Die Linke, Gabriel’s ministry has now published all the arms exports granted by the Federal Security Council since 2002. The 35 pages long letter in German shows that Germany supplied Egypt during that period repeatedly with weaponry that could be used on civilians within the country. In 2002, 2004, 2006, 2008 and 2009 German arms manufacturers were permitted to supply former president Hosni Mubarak’s regime with weapons worth more than €32.9m, including thousands of machine guns, rifles and ammunition at a value of €1m in 2004 and at a value of over €1.5m in 2006. Barely two years prior to the 25 January Revolution, at the end of 2008, the exports included equipment for the manufacturing of pistols and ammunition worth more than €2.1m and a few months later more machine guns worth €747,000.

The disturbing question comes up, how many of those pistols, machine guns and rifles were used by snipers in January 2011, killing protesters in the streets of Egypt by indiscriminate shooting from rooftops. The majority of the 846 killed were shot in the head or chest and died of those wounds. It must be asked if Egyptians like the chief graphic designer of the Cairo Opera House, Ziad Bakir, or the engineer Tarek Abdel Latif, to name only two out of 846 victims, were killed by weapons ‘Made in Germany’.

But the exports continued even after so many Egyptians died by bullets of the security forces. In May 2011 Egypt received from Germany communication equipment to the value of €2.32m and more equipment and software to monitor communication for another staggering €30.3m in 2012. With such equipment the Egyptian forces were perfectly equipped to synchronise well organised raids on dissenters, raids which killed even more unarmed protesters in the streets of Egypt. The gear needed to protect the police and army from any retaliation by those attacked, Germany supplied in the beginning of 2013 when president Morsi was in power and unrest was growing continuously against the Muslim Brotherhood rule. Protective gear worth €1.5m was exported by Germany to Egypt in March of that year. In August of 2013, after president Morsi had been removed from power by the army under the leadership of Abdel Fatah Al-Sisi, a well documented massacre at the Rabaa Al-Adaweya sit-in cost almost a thousand Egyptian lives. Again the question must be raised, if German weapons and gear for the security forces were used in these killings.

In 2012 a rumour was spread by Israel that Germany was to sell Egypt two modern Class 209 submarines. The government declined to confirm this and sales of such submarines cannot be found in the now published list. The arms exports in the year of 2014 to Egypt however did consist mainly of parts for the navy. Thus, supplies by Germany to the government of President Al-Sisi of weapons capable of combatting civilians in the street are so far not known. But what can be read from the now disclosed list is troubling enough and demands answers in the names of those killed in Egypt by security forces in the last four years. Especially as under President Al-Sisi the machine guns, rifles and pistols supplied by Germany are still in use with the security forces. And people are still dying by being shot in Egypt’s streets.

Worrying exports to Saudi Arabia and the United Arab Emirates

While news broke in January this year that the German Security Council had stopped arms exports to Saudi Arabia because of ongoing human rights abuses and the suspicion that the country funds military Islamists, the now disclosed list shows to what an extent Germany has supplied the oil-rich kingdom with weaponry on top of the arms exported worth €360m published in 2013. The figures show that the Merkel government in the years of 2009 to 2013 granted 43 of 52 approvals for arms sales to Saudi Arabia alone – including thousands of machine guns, ammunition, parts for tanks and armoured vehicles – equipment allowing for the suppression of internal – but also of Bahraini – dissent. A majority of arms sales were granted after Saudi Arabia had entered Bahrain in 2011 and supported the kingdom in crushing the peaceful protest at the Pearl Roundabout.

In March 2011 about 1200 troops from Saudi Arabia and about 800 from the United Arab Emirates entered Bahrain and secured key installations with Saudi Arabia threatening to directly confront the protesters at the Pearl Square if Bahrain wouldn’t do it. A Saudi official said, the mobilisation would allow Bahrain to free up its own police and military forces to deal with the demonstrators. – Something Bahrain did, killing at least 35 protesters in the confrontation. – And the weapons and armoured vehicles Saudi Arabia and the UAE transported across the King Fahd Causeway to ensure this, much of it supplied by Germany, were impressive in numbers and power.

According to the data in the published list, Germany has also supplied Saudi Arabia with the capacity to now produce independently the infamous and notorious Heckler & Koch G36 assault rifle, the most used weapon not only by the NATO forces but also by almost every Islamist militia in the Middle East. Given that such weapons easily keep functioning for up to 30 years and more, it must be taken for granted that these weapons will be used in Middle East conflicts for decades to come with no guarantees that they will not also be turned on peaceful protesters in Saudi Arabia or neighbouring Arab states.

Germany must demand proof from Egypt

While Germany has earned a reputation in the world as an honest broker between quarrelling parties, trying to prevent violent conflicts and war, it is at the same time exporting arms on a large scale to countries like Saudi Arabia and the United Arab Emirates, who have participated in the brutal crushing of peaceful protests in Bahrain, and has armed those in power in Egypt who did not shy away from killing their own citizens on a shockingly large scale.

Germany should apologise for this – as it did last year, when it was revealed that Mexican students were killed with Heckler & Koch weapons exported by Germany – and must demand from Egypt not only reassurance in words but solid proof that the weapons supplied to the different Egyptian regimes were not used to kill unarmed protesters.

After the indiscriminate shooting of thousands by Egyptian security forces and the unwillingness of the Egyptian prosecution to this day to investigate, it is a proof that will be hard to come by.

Jonathan Moremi is a freelance journalist and writer with 36 years experience reporting as a political correspondent both from Germany and the Middle East. Since the outbreak of the revolution in 2011 he concentrates his reporting mainly on Egypt. He has studied law and has worked extensively for international human rights organisations. You can follow him on twitter at @jonamorem