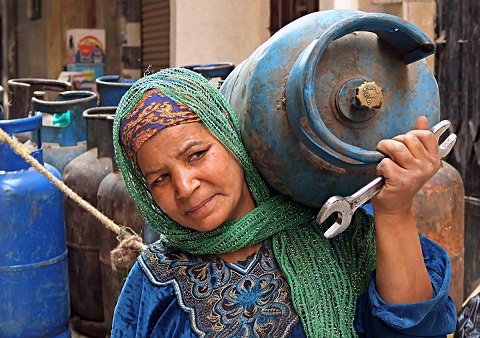 Mehleb said in an interview with state media that the government is working on “organising the selling of the cylinders” to guarantee fair destruction. He added that the state is subsidising each cylinder with EGP 60.

Butane gas is heavily subsidised by the government, and mostly used by the low-income class and higher-income groups residing in areas that are not linked to the national gas grid. Since the beginning of 2015 there has been an increasing shortage in cylinders.

This led to a renewed butane cylinders crisis, with overcrowded queues in front of warehouses a common scene. Media reports said the situation was exacerbated in Upper Egypt and rural areas, where the price of a cylinder reached EGP 50 due to the exploitation of the black market.

Sameh, a worker from Cairo’s neighbourhood Shubra told Daily News Egypt that some of the government employees in the distribution outlets hide the cylinders to sell them to private traders.

“There is no police or top government officials to see this. Some people stay for hours to get one cylinder. Others just give up and buy it for more than EGP 80 from private shops,” he added.

Mehleb asserted many of the country’s local counsels suffer from mismanagement and corruption, and stressed the need to return to government-controlled consumer markets.

Last January, President Abdel Fattah Al-Sisi stated that the butane shortage was due to weather conditions that delayed the shipments to Egypt.

50% of Egypt’s butane is imported from Algeria, Libya and Saudi Arabia.

Last November, the country faced a similar crisis, which was also attributed to a delay in shipments of butane gas due to inclement weather.

During the rule of former president Mohamed Morsi, similar crises took place, with then-regime supporters blaming opponents of plotting the crisis to agitate the masses against the Muslim Brotherhood-affiliated president.

Since 2010, the state has been trying to implement smart cards to buy and sell butane cylinders, but has failed.

The current crisis is taking place as Egypt is preparing to host the Economic Summit, where main fuel multinational companies are expected to announce new investments in Egypt.