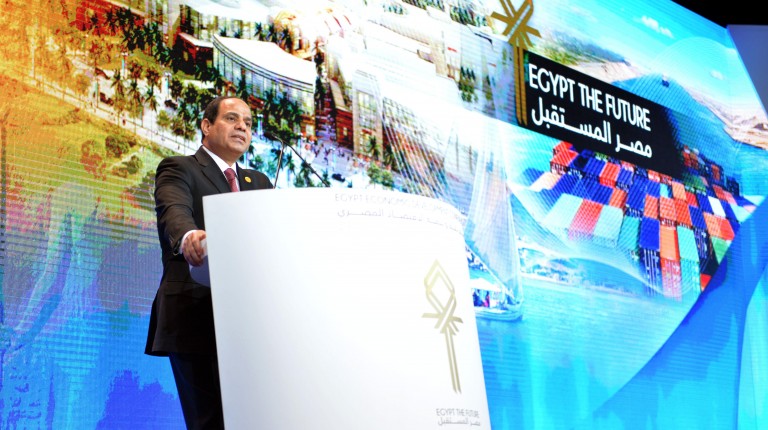 Inaugurating the long-awaited summit, President Abdel Fattah Al-Sisi began his opening speech by welcoming the “partners of development” in what he described as “new Egypt”, marked by stability and prosperity.

“This is not simply a donor conference, but it builds the foundations for economic growth through cooperation that jointly benefits both parties, and contributes to social equality and supports the youth of Egypt,” Al-Sisi noted.

Stability is the foundation for future economic growth, not just for Egypt but for the region, Al-Sisi went on, adding that Egypt can provide the model for Arab and Islamic development in the “fight against terrorism” through balanced, fair and just development.

Al-Sisi explained that the Egyptian government’s reform programme is based on three pillars:  financial balance, legislative reform and infrastructure development; with the prime focus of creating jobs for the people of Egypt.

The president added that the government is targeting GDP growth exceeding 6% over the next five years, while reducing unemployment to below 10%.

The government has already taken steps to limit state debt and fight inflation, while subsidy reform has created an environment attractive to international investors, Al-Sisi said. He further noted that the fiscal policy has been backed by a raft of legislative reforms to facilitate foreign investment, including a new investment law and improved investor services to create a climate conducive to foreign investment.