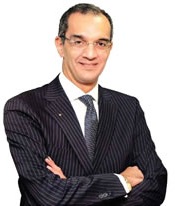 The International Business Machines Corporation (IBM) is an American multinational technology and consulting corporation, and is one of the leading global companies in Egypt in the technology sector.

IBM also worked alongside the Information Technology Industry Development Agency (ITIDA) to offer its expertise in cloud computing to 100 Egyptian ISVs, according to General Manager of IBM Egypt Amr Talaat.

Daily News Egypt spoke to Talaat about the role of IBM after the Economic Summit.

Due to the importance of technology in the implementation of proposed projects in the economic conference, what is the company’s role in supporting these projects technically?

As the country pushes forward its economic reforms, IBM continues to play a critical role by delivering the technology support vital for any growth plan to take shape. The rise of technology has reset government expectations and made IBM to rethink the end-to-end government experience and accelerate our transition to providing cloud, Big Data and analytics, mobile, social and security solutions to help the country face its challenges and develop its economy through embracing new technologies.

IBM Inside Sales representatives can now engage digitally with clients and business partners across 70 countries in the region — using screen sharing, video conferencing, live text chat and social media platforms — to help them transform their businesses.

We are waiting for the economic conference to have a complete vision on the projects and determine how we can help the government to innovate to achieve the business outcomes that make them stand out in a complex world.

What are the projects in which the company believes it is possible to invest in the upcoming period?

We continue to support key sectors of the national economy through our work and we continue to engage with stakeholders in the private, government and non- governmental sectors to advance social, economic and scientific development.

What is your vision for the conference?

I believe the conference is sending a very positive image to the world and shows that Egypt is entering a new era of stability where companies have a huge opportunity for investments. It also shows Egypt’s ability to attract investments and its ability to create an atmosphere within which investors operate.

In your opinion, what are the challenges that face Egyptian investments?

Of course the major challenge is the security and the terrorism combat that has been facing the country since the revolution. However IBM foresee Egypt as a potential market and IBM’s CEO visit in February reflects this and marks the company’s deep commitment to strengthening that process of growth and opportunity and extending the long and highly successful partnerships we have enjoyed in Egypt.

IBM has been an involved and contributing part of the Egyptian economy since its establishment in 1954, through which we faced various challenges ranging from political to economical, but our operations were not affected based on our belief that Egypt is a potential market.

What are the economic reforms that the company believes they are important for the success of the conference and to increase the company’s investment and business in Egypt?

I believe that the institutional and regulatory frameworks that govern investment are the most important factor, as they create an atmosphere within which investors operate.

What is the current investment of IBM in Egypt?

Our investments in Egypt go beyond financial terms. We have significantly increased our presence past three years through establishing two centres; the Global Competency Center for Hardware and Global Competency Center for Software. This year we launched the IBM Middle East and Africa Digital Sales Center, a state-of-the-art facility located in Cairo’s Smart Village Egypt office complex.