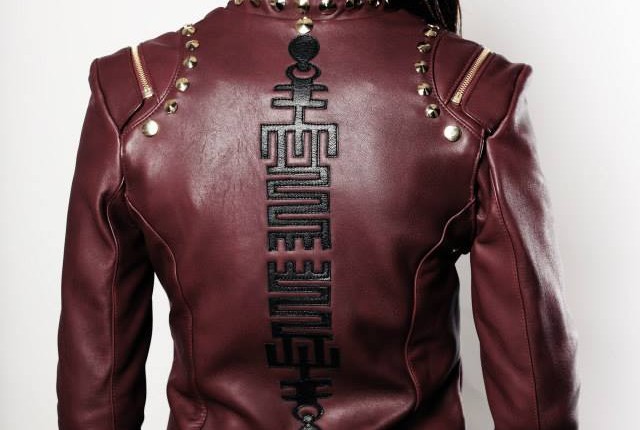 “The journey I am taking is my destiny, the enigma of possibilities. I cannot see exactly what lies ahead. The great beauty of the horizon skips my sight. Tangled by victories and embracing all that is life. I see sparkles, bread crumbs of light that guide me. The roads twist and turn. Merge with forest, stone and wild fire.”

These lines are how renowned handbag brand Okhtein, led by Aya and Mounaz Abdelraof, along with local designer Yasmine El-Said chose to showcase their collaboration to the public.

Last week, an open invite provided a unique experience. The crowd was welcomed to the second floor of New Cairo’s designer-store the Pop-Up Shop by the three entrepreneurs behind the two brands.

With the room in darkness, all eyes looked to the projector and the “Odo Nnyew Fie Kwan”, (“Love never loses its way home”), was played for the first time.

The fashion film, shot by Photo Boutique, was only the starter of the night, few minutes later several industrial barrels lit-up with spotlights to highlight and introduce eight exquisite leather jackets.

Each jacket embraced a special African sign in support of women. While the DUAFE represented beauty and cleanliness, the KWATAKYE ATIKO is the symbol of bravery and valour, and the NKYINKYIM shows dynamism and versatility. The team, however, infused the old with the new, using both already-known symbols as well as creations of their own.

“We were trying to represent women who are trying to find love in anything. This symbol is called “Her”, and we combined other symbols and made it look like a woman. This is not like an original symbol, we made it into our signature,” said El-Said.

“Her” is the result of combining all women-related signs together; just like the entire collection it was influenced by the African culture and created to communicate a strong message to all women.

Despite the evident African character of the project, neither the materials nor the designs were solely African.

The designers wanted to create a project that represents African culture with an Egyptian influence, while appealing to the modern woman. The materials were 100% Egyptian, while the cuts and silhouettes were strictly modern and futuristic.

“It is all handmade, our tailors did everything. The laser, cutting and everything was made here in Egypt,” El-Said added.

Even though Egypt has the world’s best cotton and leather, along with many other raw materials, most local designers tend not to use them. However, the three ladies wanted to go against the tide, and create a genuinely Egyptian product.

Therefore, the collection was made of a one-of-a-kind material. Okhtein always uses a special type of leather that is 100% Egyptian, yet entirely dedicated to exporting.

“We are the only people who have access to this fine, high-quality lamb skin as it is usually exported to Italy,” said Aya Abdelraof.

Meanwhile, all the creations were made in the brand’s workshops. But what is even more impressive, is the hand-made intricate imprints that some jackets have.

To create a strong message that would reach out to females everywhere, not just in Egypt and Africa, more women were invited to the collaboration.

An inspiring poem by Zakaria encouraging women to follow their dreams and never fear the way to their goals added relevance to the project. Meanwhile, Photo Boutique turned the words into a visual film and the jackets to what seem like fashionable armour for ambitious women.

While Okhtein and El-Said have held this women-empowerment idea for a while, it came to life only a couple of months ago. This was when the sisters behind Okhtein decided it was time to open up to the world, and take the Egyptian fashion industry to a new phase.

“We are very much interested in anthropology and sociology. So we love reading about tribes, and inspiration can come from anywhere,” Aya Abdelraof said. “We wanted something very symbolic and while searching we came across the [concept of] Africa.”

The Abdelraof sisters were so inspired by African culture and its women-related legacy, that the sisters then started the search for a qualified partner.

“We took an ethnic theme, but we did not want to make it look so ethnic. We tried to make it very clean, very cut, very modern. Futuristic!” said Aya Abelraof.

El-Said was the perfect match. Right away the team discovered that they all share one big theme. The group was driven by the love for art and the need to build on foreign cultures and support women.

The project’s timing meets the current developments in the local fashion scene. It also manifests the recovering Egyptian-African relations and local reaction to political updates.

“We wanted to open up to the world and show that fashion is everywhere and for everyone,” said Aya Abdelraof.

After reflecting the West’s trends and concepts for so many years, this project turns the tables as the eight jackets effortlessly send an Egyptian message to the fashion world.

Okhtein is a local brand that was launched only a year ago. The Abdelraof sisters tend to base their designs on their Egyptian roots and culture. Moreover, the brand is always keen on using Egyptian materials solely, which makes them a pioneer in this industry. The sisters plan on soon moving from accessories to clothes, and they consider this project the start.

On the other hand, Yasmine El-Said is an Egyptian designer who lived in Paris and studied nouvelle couture style and pattern drafting at France’s ESMOD University. She started out four years ago with a ready-to-wear line. She has lately shifted to couture, and in 2013, Yasmine became the very first Egyptian to reach the finals of Vogue’s talent contest.