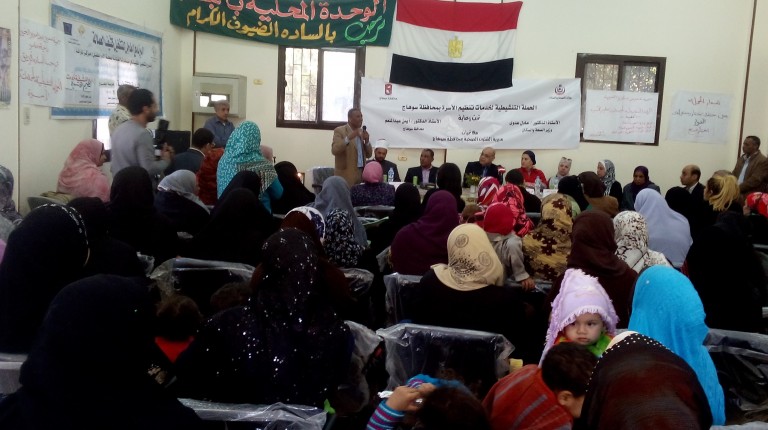 Just 471km south of the Cairo governorate, struggling Egyptian women try to overcome poverty and ignorance on the matter of family planning.

A three-day awareness raising campaign, coordinated by both the Health Ministry and the United Nations Population Fund (UNFPA) in Sohag, saw encouraging attendance from women from the governorate’s villages to obtain better knowledge on family planning.

According to Health Ministry officials, Sohag holds the worst statistics regarding birth control and family planning, with only 11% of the Upper Egypt governorate’s women use long-term control methods, such as the intrauterine device (IUD), while birth control methods are barely used by men.

Atef Al-Shitany, the ministry’s head of population and family planning division, says that 26% of Sohags’ women who already have children do not want more children.

“But it keeps happening,” he added. “The problem with Sohag is its people; they have to be aware of their rights.”

Al-Shitany explained that while the governorate holds the highest fertility levels in the country, it suffers from the lowest ratio of vaccinations among its citizens.

Local health units are not only for patients, but for everyone to receive medical care, he added. He highlighted a shortage of doctors who are not usually willing to work in remote areas, adding that “Sohag is not attractive to doctors”.

The governorate has been highlighted as among the poorest three in the country, alongside Assiut and Qena.

The three-day campaign included visits to a number of Sohag’s poor villages to address the women residents about the issue of birth control.

Howayda Khalifa is a 41-year-old housewife from Al-Bitakh village, who gave birth to four girls with her husband, a low-income worker. Howayda said that at the beginning of marriage she wanted a boy and a girl, but ended up with four girls and is still chasing the “boy”.

A tradition deep-rooted in Upper Egypt’s countryside states that a boy is preferable, and men, in particular, seek a male child for he can “hold their fathers’ names, and help deliver for the family”.

“I’m convinced with the importance of family planning, but I’m also convinced that life is hard, and I need a man to help the family as my husband suffers illness that makes him unable to work consistently,” Howayida added.

Financially tight conditions drive other women to the camp of birth control. Asmaa El-Sayed, 25, who has three children, says that “three are enough”.

Asmaa, from the same village as Howayda, tried birth control, using injections, after she gave birth to her second child. However, she quit this form of birth control after she suffered side effects.

After giving birth to her third child, she returned to using birth control via injection, giving financial reasons as the main reason behind the decision.

The campaign participated in an awareness meeting, organised by a local NGO in Fezzara village. Around 200 women of different age groups, most of them bringing their children along, attended the meeting.

They showed sound understanding of birth control options and the importance of following-up with the local health authorities.

However, other opinions were present. Mother-of-seven Bakhita Abdel Hafeez, 35, saw her husband pass away three years ago while she was pregnant with her seventh child.

“Children represent support,” she said. Bakhita got married while she was seventeen.

“Maybe now I have a different stance on this, but that was my opinion then,” she said.

Al-Shitany values UNFPA’s support for the case of raising awareness, saying: “The fund is a main partner in countering population related issues in Egypt.”

“Targets and strategies of the fund align with the ministry’s,” Al-Shitany stated.

Maternal deaths due to repetitive pregnancies and lack of awareness of the importance of family planning and following up with health authorities, is one of the main concerns he pointed out.

He asserted: “People believe the government holds full responsibility, society also has a role to play.”

In a society religiously adhering to traditions, women face challenges in their closest circles.

Safaa Ibrahim, 25, stood holding her two-and-a-half-year-old son, Seif. He is her only child after almost four years of marriage.

“I want only two kids,” she says. “My husband wants to have seven, but I’m not changing my mind.”

Safaa does not use birth control methods, saying diffidently that women in the closed societies of rural Upper Egypt are known for: “I control the natural way.”

She was raised among eight siblings and it did not work out for the family. “I don’t want to be in their shoes,” she insists.

Annual population increase rate in Egypt rose in 2014 to reach 2.6%

41% of married women do not use birth control

2.4 million women of child-bearing age do not use birth control, despite having at least 3.5 children

1,000 of those women of child-bearing age do not use birth control despite having at least five children

*all stats are according to UNFPA and Health ministry officials