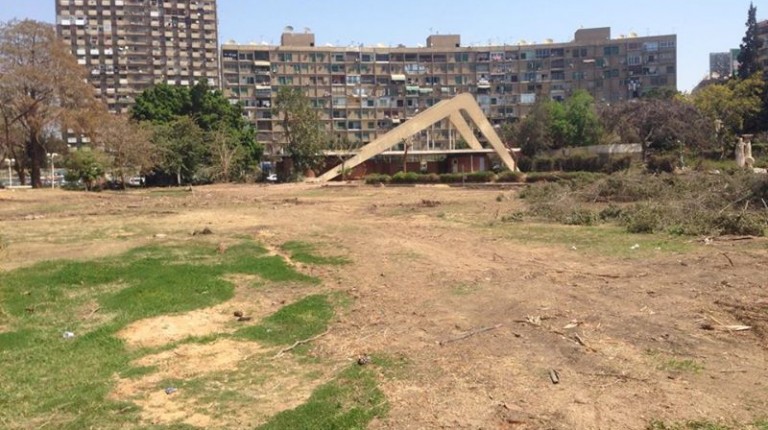 Growing up in the Heliopolis neighbourhood of Cairo means spending a part of your life inside the walls of Merryland Park.  With the relaxing greens covering everywhere, the feeling of purity inspired by the swan lake it has, and the loud giggling of children while playing in their special section, this is a haven of peace in the capital’s chaos.

That breath-taking scene was recently replaced with a lonesome desert view after all of the trees were removed, leaving the beautiful park a barren place to build a garage. This is a part of infrastructure upgrades, the owning company claims.

The Merryland Park holds a lifetime of memories for most people living nearby, as the park has played a huge part in Heliopolis’ green scene.

“The Merryland is connected to every period of my life time,” said Nehad Wassim, a Heliopolis resident. “I used to go play there when I was a little kid, then my romantic memories when I was engaged were there, and after I gave birth to my daughter, I used to take her there to play with her friends.”

The memories people have with the Merryland are unlimited nor countable, according to Nehad.

The park is owned by the public sector company Heliopolis Housing and Development Company.  Ali Moustafa, the company’s Chairman, said in a phone interview with the privately-owned CBC channel that the trees were not chopped down. He said they were only moved from their place to another garden until they build the underground parking space, which is required to renew the park.

“The trees were moved by an agriculture specialist that made sure that they can be replanted again,” Moustafa said. “Rare trees were never touched.”

The Ministry of Environment stated in a press release on Sunday that the company did not receive permission from the ministries of Environment or Agriculture to cut the trees down. Minister of Environment Khaled Fahmy asked that the proceedings be stopped until it is known whose responsibility it is and the environmental side effects of the action.

Fahmy called the incident of “unfair trimming for the trees”, and ordered a claim against the company responsible for the park development be filed until the situation has been studied. This is due to the lack of environmental approvals, which does not allow such practices.

Mahmoud Hejazy, Chairman of the Holding Company for Housing, which has the authority over the Heliopolis branch, refused to comment to Daily News Egypt until the final decision has been given.

The Merryland Park is considered one of the largest parks in Cairo, and was established in 1952.