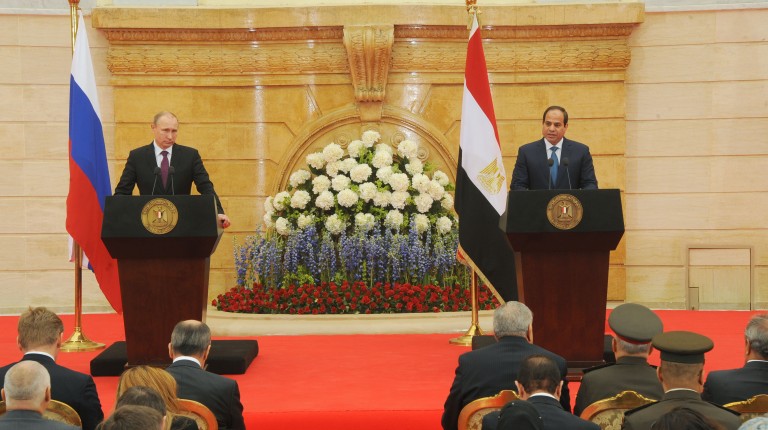 The US and Russia are the biggest global arms exporters, with the US exporting arms worth $10.19bn in 2014, leading Russia at $5.97bn according to data published by the independent peace research institute SIPRI based in Stockholm. Their respective clients, though, are very different. While one can find the Sunni GCC monarchies, along with Israel, on the US’ list, these countries are nowhere to be found on the Russian export lists. Instead there is a variety of other customers there: most interestingly, though hindered by UN arms embargos, Iran, Iraq and Syria.

Russian and US relations have never been easy concerning the nature of the US as the world’s single superpower, and Russia as the remnant of the Soviet Union. Russia was once the only country rival to the US in military and economic power. These tensions only rose due to the civil war in Syria where Russia emerged, alongside Iran, as one of the biggest supporters of the regime. The US sided with the GCC as an important supplier of military goods and political support to the Syrian rebels.

The ties between the two world powers meanwhile only worsened during the Ukraine crisis, further deteriorating the anyway loaded relationship.

Senior Researcher at SIPRI institute Pieter Wezeman describes the relationship between the US/Europe and Russia to Daily News Egypt as “deteriorating”. However, he strongly disputes that “Cold War times are back in the world of arms transfers”, describing such an assumption as “way too early”. He noted that the lines between foreign powers running through the Middle East are much more determined by commercial interests than by real political distribution of arms. He cited the shipment of Rafale jets by France to Egypt, when the US halted the delivery of fighter jets, as an example.

The situation though with the GCC countries and Iran is more conflict-ridden with GCC monarchies and the Islamic Republic interlocked in proxy war – like conflicts in a variety of countries. In addition to these ongoing conflicts, the rapid arms procurement of countries like Saudi Arabia, Qatar and the UAE along with the Iranian nuclear programme is making this conflict even more dangerous with “Maximum arms procurement […], not arms control” being the policy in several states as Wezeman put it.

With Iran’s proxy in Lebanon, the Hezbollah militia is actively involved in the Syrian civil war alongside logistical support by Iranian military advisors and massive financial support. The war in Syria though “already constrained Iran’s influence in the Levant”, according to US-based think tank ‘Institute for the Study of War’. Wezeman struck the same chord, saying, that “in Syria Russia has essentially lost a main ally”, linking Iran’s and Russia’s common interest in the survival of the Al- Assad regime.

On the other side, “several GCC states are giving financial aid, weapons and other support to shore up the military capacities of states in the region […] and non-state armed actors such as anti-Assad (therefore anti-Iran) and anti-ISIS armed groups in Syria.”

At the same time Iran is heavily involved in the Iraqi efforts to tackle the ‘Islamic State’ threat with Iranian officers coordinating Iraqi offenses and, along with Russia, providing military equipment. Yet in Iraq, the US and European involvement is also prominent, with both shipping large amounts of equipment to the Iraqi central government and the Kurds, thus making the struggle against the ‘Islamic State’ effectively a competition between the global players to control Iraq.

Other emerging conflicts are to be found in Yemen where Shi’a Houthi militias have established themselves as the de-facto rulers of the country – with backing by Iran. Saudi Arabia has always been wary of the Iranian influence near its borders, leading to an intervention in Bahrain in 2011 when the Sunni monarchy was threatened by large protests of its Shi’a-majority population. As Wezeman put it: “Saudi [Arabia], UAE and Qatar have in recent years shown to be willing to use force […] also to join military interventions.” He cited the interventions in Syria and Libya as examples.

The Egyptian situation however is rather special with President Al-Sisi not following the usual path of strictly sticking to the United States but intensifying relationships with Russia. Al-Ahram Center for Strategic Studies Analyst Dr. Gamal Sultan told Daily News Egypt this policy was reminiscent of early Nasser times than of the Mubarak era. It maintains a careful balance between the superpowers without necessarily taking sides while “using them to the own benefit”. This comes despite the fact that he admits the situation is not comparable with the Cold War, concerning the much more diverse environment in which politics take place.

Addressing the issue of the ongoing conflict between the GCC and Iran, he affirms that Egypt has a “strong commitment towards the security of the GCC”. Egypt does, however, have a different perception towards the Iranian threat in other countries like Yemen and Syria. This means that Egypt is differentiating between the direct threat posed by Iran and its influence towards Egypt’s allies located in the GCC, and the threat Iranian influence is posing to other countries.

Recent reports by SIPRI indicate Saudi Arabia is pushing its military expenditures to new heights this year with no end in sight. The country is likely to become the largest arms importer in 2015, while the figures for the whole GCC increased by 71% in a five year period, accounting for 54% of imports to the whole Middle East. These imports include not only armoured vehicles and land defence systems, but also many ships and anti-ship missiles. This is highly unsettling concerning the ongoing conflict with Iran in the Persian Gulf and in the Strait of Hormuz. Yet Wezeman is sceptical about the GCC’s offensive intentions, even though they are building up “armed forces to deal with whatever eventuality they can think of”.

Even if the Cold War is not back, at least not yet, all in all the Arab league is still facing a tough situation at the upcoming summit to find a common position on the Iran issue. Further issues are faced regarding the larger scale geopolitical game being played out right on its doorstep, with the US and Russia struggling to maximise their influence in the Middle East. Given its role, Egypt is being torn between the two superpowers, while simultaneously being one of the major powers in the Middle East, which will be a decisive factor in this struggle.