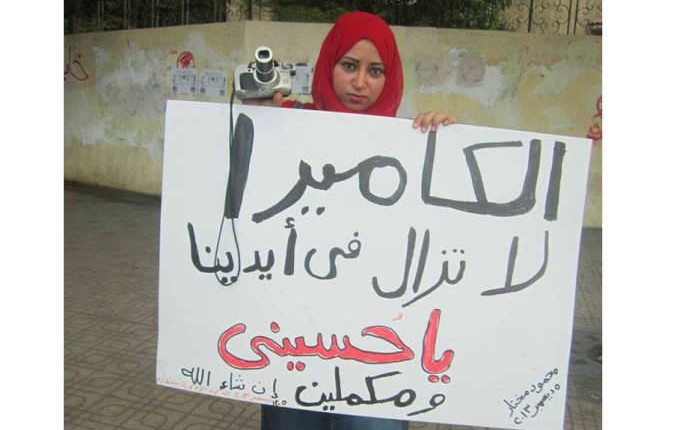 The political turmoil and security deterioration since the 25 January Revolution in 2011 have put journalists on the frontline of non-stop confrontations between security forces and protesters.

In this period, 10 journalists have died on duty in Egypt, according to the Committee to Project Journalists (CJP).

Two days before the Press Syndicate’s 74th anniversary on Tuesday, the syndicate’s newly elected head, Yehia Qallash, and a delegation of its board members and other paid a visit to the family of Mayada Ashraf, the latest on the list of killed journalists in Egypt.

Mayada, aged 23, was a reporter for Al-Dostour newspaper when she was shot dead while covering clashes between security forces and protesters in Ain Shams neighbourhood on 28 March 2014.

Eyewitnesses and journalists said that Mayada was killed by security forces fire, while the Ministry of Interior denied the accusations. Instead, the ministry blamed protesters for the journalist’s killing, according to a report from the CPJ.

One year later, nobody has been brought to court over the killing of Mayada.

One of the bloodiest days in Egypt’s modern history, the Rabaa Al-Adaweya sit-in dispersal on 14 August 2013, was also certainly the deadliest for journalism and the media.

Egyptian authorities announced following the dispersal of the sit-ins that at least 600 protesters were killed, while then-prime minister Hazem El-Beblawi later estimated the causalities to stand at around 1,000. Nobody was brought to court for killing the journalists or the protesters.

Working for state-run media has proven not to be a guarantee for safety as a journalist.. Following the dispersal of the sit-ins, a curfew was imposed, but journalists were officially exempted from the curfew.

However, Al-Ahram’s Tamer Abdel Raouf was driving home in the city Damanhour along with a colleague from state-run Al-Gomhuria newspaper Hamid Al-Barbary, when they were stopped at a military checkpoint.

“Soldiers gestured to them, telling them to leave the checkpoint, so Abdel Raouf turned the car around. The soldiers then opened fire on the car,” CPJ reported. Abdel Raouf was killed by the gun fire.

The military officials at first claimed the car raised suspicion for driving at a high speed, then accused Al-Barbary of shooting at the checkpoint. He was later released and the case was “forgotten”.

Other famous cases include Al-Hosseini Abu Deif, who was killed while covering clashes between pro- and anti-Brotherhood protesters outside the presidential palace in December 2012, and Ahmed Assem, photographer for Muslim Brotherhood’s Freedom and Justice newspaper, who was killed five days after the removal of president Mohamed Morsi and the Brotherhood government in 3 July 2013.