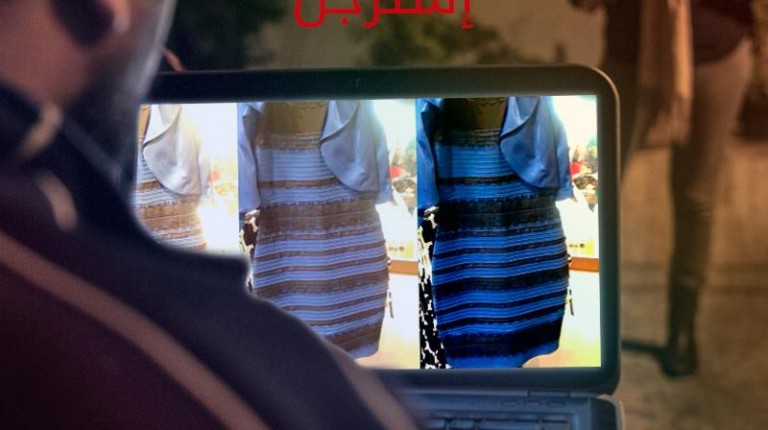 This dress is blue and black. No, it’s white and gold. This controversy took place over social media networks for the past couple of weeks, as a simple picture taken by a girl caused the people to separate into two teams. Each side defended the colour they saw, without understanding the reason the dress was seen differently by others.

During the non-stop conversations over the dress, some products used the phenomenon to their advertising advantage within social media.

“The colour of the dress doesn’t matter. Focus on the girl who’s wearing it. That’s what matters.” These statements were part of a series of advertisements for Birell, a non- alcoholic beer company, all under the theme of “Estargel” (Be a man).

The ad’s poster featured a man looking at the dress and fantasising about the girl who is going to wear it.  It was shared on the Birell Facebook page with the title “Birellman”.

In the description of the product, the official website mentioned that Birell is “the masculine brand” that requires competence to handle its bitterness.

While Birell company officials believed the ad was a way to raise the popularity of the drink, others saw it as a message that encourages sexual harassment.

“This is not the first time Birell releases an ad with that trend,” said Sally Zohney, an Egyptian Feminist. “The campaign is encouraging males to follow their instincts not to act as ethical men.”

Zohney believes that the definition of manliness in Egypt is missing a lot and needs to be justified, and this series of advertisements are not helping and delivers wrong messages about men.

The ad was published in a country in which an overwhelming majority of Egyptian women (99.3%) have experienced some sort of sexual harassment and 96.5% of women had been sexually assaulted, according to a report by the United Nations Entity for Gender Equality and the Empowerment of Women in April 2013.

The previous Birell ad series began in 2009 on TV. The ads depicted a group of men at a rehab centre discussing their problems with being male in the Egyptian society, showing that the customer has to man up to handle drinking Birell.

One of the ads was about a man annoyed due to his super sensitivity and crying and his friends provided him the needed support to “man up” and stop doing so.

“Birell is promoting sag feelings,” Zohney adds. “You can’t tell someone he can’t cry just because he’s a man. He’s eventually a human being.”

Women rights NGOs are not the only entities refusing the ad and finding them inappropriate, but a number of homosexual and human rights organisations are now collaborating to find the best way to fight back the harassment concept it spreads, according to Zoheny.

“As a man, I saw the dress ad as a form of entrenching sexual harassment as a fact stated in our culture and a normal thing to be dealt with,” said 24-year-old Mahmoud Mostafa. “It plays strongly on the instinct of the customer and features the woman as a commodity.”

Mohammed Nassar also reiterated that the ad is “promoting sexism and gender discrimination, and could be featured in a better way”.

Monica George, the communication manager of Harassmap, an online platform fighting and spreading awareness on sexual harassment, found the campaign a “pure invitation for sexual harassment”.

”It is promoting everything we’re fighting against,” she said.

While the Birell advertisement mainly aimed to increase the publicity of the drink, most of the comments on it are negative and revealed how annoyed both genders are of its message.