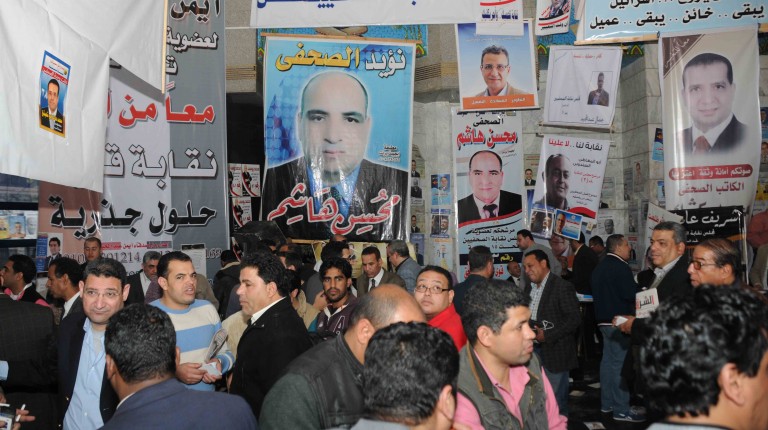 As the local Press Syndicate celebrated its 74th anniversary Tuesday, it also welcomed a new leader following the March elections. Yehia Qallash became the new president of the syndicate to succeed Diaa Rashwan, who has been in the position since 2013.

Qallash has campaigned on matters of press freedoms and journalists rights since the 1980s, and has been a member of the syndicate’s elected council since 1995. From 1999 to 2007, he took the post of the syndicate’s secretary-general.

“The new constitution included important guarantees in favour of journalism and media,” Qallash said. “It still needs to be translated into laws, and once that is properly done, the field will greatly benefit from it.”

New legislations should improve the issue of imprisonment for publishing crimes, according to Qallash. Journalists’ imprisonment for publishing crimes is still possible by law in cases of public libel and slander, racism and incitement to hatred and violence. Leaders in journalism have fought long battles against laws putting journalists behind bars.

However, journalists nowadays also face detention and arrests while on the job.

“There should be no such thing,” Qallah commented. “Not only is this a right for journalists, but it is also a task that should be facilitated and protected.”

The Press Syndicate’s membership is significant in Egypt, as a proof of the profession by law. Nevertheless, acquiring syndicate membership is not simple, especially with the increasing presence of online journalism, in which most journalists do not even have contracts.

In response to the difficulty for electronic journalism to have a well-established legal status, the Egyptian Online Journalists’ Syndicate (EOJS) was launched in 2013 as a professional syndicate. However the law prevents multiple syndicates for the same profession, which makes EOJSs status unofficial.

According to EORS chairman Salah Abdel Sabour, the syndicate has almost 1,200 members, and 300 more journalists are expected to become members by January. Meanwhile, at least 6,000 journalists work in different online news websites according to his estimation, including 1,200 who are Press Syndicate members.

Abdel Sabour had previously stated that EORS “imposes” itself as a third party between a journalist and his employer to protect journalists from arbitrary dismissals, something that has commonly happened with several institutions in the past year.

For his part, Qallash said that electronic journalism is one of the discussions that was mentioned back in 2004. It is still on the table, especially since there is a clear issue of having an independent syndicate for online journalists. On the other hand, the process of inclusion of that branch in the current syndicate is also complicated.

“Journalists have not really come together for a dialogue on the matters that concern them inside the syndicate in 11 years. There are many challenges and issues that need to be discussed and debated between journalists,” Qallash said.

“Egyptian journalism has struggled for 300 years, faced numerous challenges, and was able to develop and make achievements. Is it going to stop when it comes to a new sort of development? This needs both legislative reform and group dialogue,” he concluded.