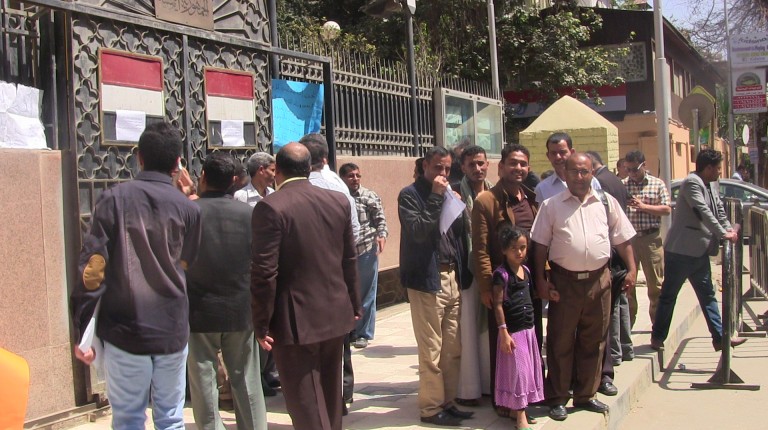 Tens of Yemeni nationals protested Tuesday outside their embassy in Cairo, demanding to return to their home country after its airspace was closed last Thursday.

Crowds gathered outside the embassy in the Dokki area in Giza almost a week after the start of the Saudi-led military operation against the Shi’a rebel group Houthis. The rebel group had taken over the Yemeni capital, Sana’a, and other cities in the country.

Subsequently, the Egyptian authorities suspended flights in and out of Yemen due to the deteriorating security conditions, the Egyptian foreign ministry announced.

Among the protesters was Yemeni lawyer Abdullah Hamoud Abdou, who said: “All Yemenis here call for their return or to be provided with a place to live.”

“Neighbouring countries facilitated the safe return of their citizens, they can let us in our country the same way they took their citizens out,” he added.

A large number of Yemeni nationals who protested outside the embassy in shared similar stories Abdou said, adding: “Most of the Yeminis here came for medical treatment.”

“All Yeminis who came to Egypt want to return back to their homeland,” he said. “We call for countries participating in the airstrikes on Yemen to cease it for some time for this humanitarian situation. Otherwise, we need authorities to provide us with places to live until we return to our country.”

Another concern for the stranded Yemenis was that of transferring money, and raised objections over restrictions placed by Western Union for transactions to and from Yemen.

“The company has cited the political situation as a reason for halting the transactions,” one of the protesters said.

An official with Western Union, however, gave conflicting reports – the official clarified that some regulations were activated three months ago.

“We call for all rights groups to stand by our side,” Abdou said “We have nothing to do with political crisis going on; we are discussing a humanitarian situation.”

“We appeal to Field Marshal Al-Sisi as we are now in his country, we appeal to him to find us solutions,” one protester in Cairo said.

“We are not scared to return, all public institutions are working and the airstrikes are in certain areas,” another said. “We want to return and each one of us will manage his way in his country.”