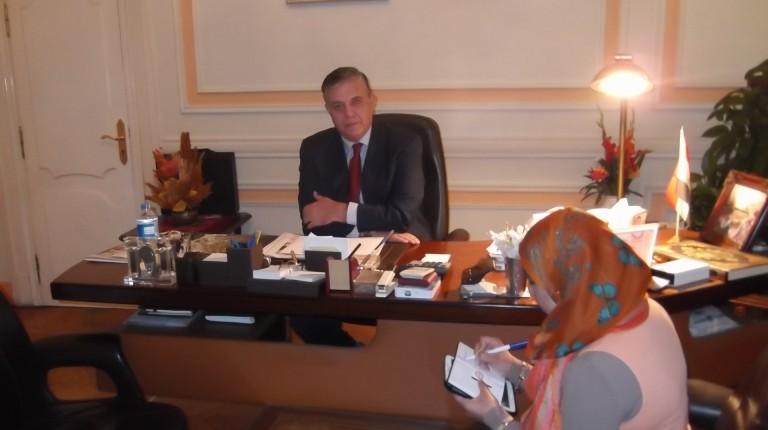 The Saudi-Egyptian Construction Company (SECON) is a joint Egyptian and Saudi government owned company. It was established in 1975 by agreement between the two countries, for the purpose of a real estate and tourism investment in Egypt. SECON projects are supervised by Egypt’s Ministry of Housing, according to the SECON CEO, Darwish Hassnin.

What is the size of the company’s capital?

Since the company started, the paid-up capital has been valued at $50m, paid equally between the two governments, then increased in 2008 to $75m. In June 2014, the capital was increased by the Extraordinary General Assembly resolution to $243m, so the total capital after increase amounted to $318m. The increase agreement was signed under the auspices and presence of Prime Minister Ibrahim Mehleb. The Saudi government paid the increase in cash, and the Egyptian government paid its share of the increase in the form of land plots. In January 2015, the Saudi cash portion, which amounted $121.5m, was deposited in the company’s account at the National Bank of Egypt (NBE). On the other hand, Egypt handed over the company three plots of land on an area of ​​100 acres in New Cairo, New Assiut, New Damietta.

How much are the company’s investments, and what are the new projects it will implement?

The company will implement three real estate projects on the lands received from the Egyptian government. In March 2015, the company consulted three of the leading consulting firms operating in Egypt on the design of these projects. The design will take three months, after that the planning process will start, and the implementation of the three projects will begin at the same time.

Solar power will be the source of the electricity power in the three projects, taking into account the country attendance to use the new energy and not to put burdens on the government. In addition to this, the projects’ design will take into account green architecture, to meet the environmental requirements in the next phase. The SECON Nile Tower project is being implemented with investments of EGP 1.6m, and will be finished in the first half of 2016. The Tower is located on Maadi’s Corniche El-Nile, and is being built on 10,000sqm, with two towers containing 23 floors each.

The company also will build the first 5-star hotel on the Corniche El-Nile, owned equally between the Egyptian and Saudi governments, which will be named “Hilton Maadi”. The company has engaged with the Hilton to manage the project, also agreeing at the start of the hotel’s design phase to be in line with the Hilton’s World Tourism criteria. The company believes it is the perfect way to avoid any difficulties in the hotel management as well as avoid the costs of modifications of any defects or errors.The company decided to build this hotel after careful studies, which have reported that there is deficit in Cairo hotel rooms and Maadi’s Corniche El-Nile is the best-suited location to build this hotel. Besides the hotel project, a tourist residential tower will be built. SECON was involved in the design, licensing, and choosing the construction company and the management and supervisory company after the 25 January revolution. This means that the company trusts in Egypt’s stability and recovery. During the next five years, the company’s investments will be valued at EGP 5bn, ranging from tourism and above middle-class housing.

How many housing units are in the new projects?

In the New Cairo project, about 2,000 housing units will be built, 350 units in the New Assiut project and 105 units in New Damietta ranging from chalets and villas, next to a tourist hotel. Our studies have shown that Damietta needs such a project, as it is a promising area especially with the presence of the Damietta Port and the establishment of a new logistics region soon. The hotel will be part of a large project in Damietta, which will contain 60 rooms.

What is your vision for the Egyptian real estate market?

What are the challenges facing the real estate market in Egypt?

I’m optimistic about the conditions of the real estate market in Egypt in the coming period. There are some legislative reforms such as the new investment law, which took into account some cons of the old law, so that it protects the rights of all parties the government and the investor, in addition to encourage the investor to invest. This law issued to ensure investor rights in the real estate sector through decisive and swift action, especially the a ‘one-stop shop’ investment window, which will shorten a lot of time and effort as well as handle the  conflict and disagreement cases.In addition, we are waiting for a forthcoming new real estate regulation to improve the real estate investment environment, improve the terms of obtaining lands, the investors need for their investments, and avoid some negatives in the old regulation. There is no successful investment, without making all his limbs success not one part only and the major positive of this step is activating these laws.

Will the Arabtec project affect your investments, especially as the project targets the same areas and governorates of yours?

The project will not affect our investment; the Egyptian real estate market is a promising market and absorbs all the housing projects. In Egypt, there are approximately 700,000 marriages per year, which means the need for 700,000 housing units. Competition among real estate companies are in favour of the Egyptian citizen.

The company operates in a private luxury, above middle-class and tourism housing projects, is the company planning to work in low-income housing in the coming period?

The company can contribute in such projects in the case of the availability of lands and in agreement with the government, through a clear and specific system to arrange these low-income housing projects so that there is a guarantee for completing the projects well.

What are the consulting offices that company works with?

What are the prices of the company’s units?

Unit prices vary, depending on the quality of the unit, place and type of housing. However, moderate and favourable prices for those who want to purchase and certainly achieve desired profit margin of the company.

Who are the buyers of your housing unit?

Purchase of units is not restricted to nationality, but Egyptians benefit from them greatly, and about 90% of the non-Egyptians are Saudis.

Do you expect an increase in Saudi investments in the Egyptian real estate market in the coming period?

There are a lot of Saudi companies that have some investments and seek to increase these. The investment climate after Economic Summit in March and after the new investment law and new real estate regulations will be greatly attractive for Arab, Gulf and foreign investment not only Saudi investments.