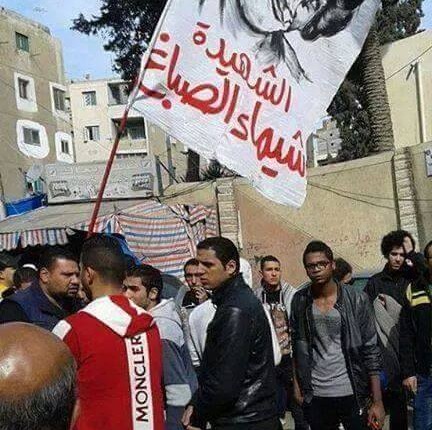 The South Cairo Criminal Court will hold the first trial session of the police officer accused of killing socialist activist Shaimaa Al-Sabbagh on 10 May, according to state-run newspaper Al-Ahram Sunday.

Al-Sabbagh was killed during the dispersal of a march organised by the Socialist Popular Alliance Party (SPAP).

The officer is from the Central Security Forces (CSF), a branch of the Ministry of Interior in charge of dealing with protests. He faces charges of manslaughter and intended injury of others, in reference to SPAP members, categorised as “illegal protesters” by law.

The manslaughter accusations refer to the birdshot he used to disperse the protest, and which led to the killing of Al-Sabbagh. The Forensic Medicine Authority stated that the shots were fired from a close distance, which possibly explains the charge of “intended injury of others”.

The SPAP members’ trial began Saturday. The members are angered by the fact that they have been referred to trial on protest charges before the officer on manslaughter charges. Furthermore, SPAP members told Daily News Egypt that bringing a police official to accountability was not enough.

Khalaf, a party member from Sohag governorate, said that Al-Sabbagh stayed in the march until the shooting began.

“She refused to leave, so one of the officers pointed directly at her and the shots were fired,” he said.

SPAP’s Secretary-General Talaat Fahmy, who is facing charges for participating in the march, said that punishing one police officer was a solution to the problem of “police brutality”.

“The entire police system needs reform, and higher rank officials ranging from the suspect’s supervisor to the former minister of interior should be held accountable,” Fahmy said.

The case has raised much controversy since the events took place, raising human rights’ concerns amid wide media attention. This is especially so since the 17 defendants accused of breaching the Protest Law include eyewitnesses who were turned into suspects.

“The fact that the authorities are resorting to blatant intimidation tactics to silence witnesses shows just how the criminal justice system in Egypt is being used as a tool of repression,” said Said Boumedouha, Acting Director of the Middle East and North Africa Programme, Amnesty International in a report on 2 April.