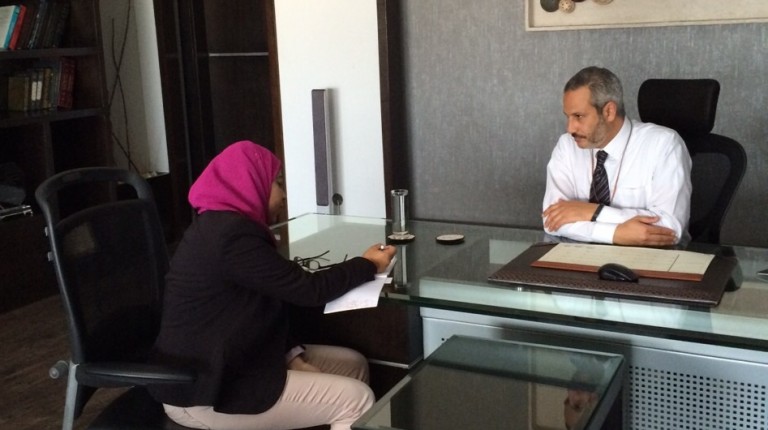 In an interview with Daily News Egypt, Chairman and CEO of B-Tech Mahmoud Khattab has outlined where his company is going this year.

What is B-Tech and its work in Egyptian market?

B-Tech is the first retail company in Egypt, as the idea of organised retail market did not exist in the ‘90s. We conducted a study in the mid-’90s and found that clients’ need for buying  home supplies through premiums, but at the time the experience proved that the clients didn’t like to deal with banks in paying premiums. The company was one of Olympic Group, with 40% shares in the Egyptian Stock Exchange (EGX) in 2011, while Olympic Group owns the majority of shares by 58%. We have three main activities in B-Tech: retail activity represented in our shops across Egypt; business activity, which is represented in selling products of international companies that we represent in Egypt; and instalments activity. We are considered the only company that deals directly with customers through an instalment system.

Does Olympic own B-Tech? Has it sold to international Electrolux group?

No, it is not owned by Olympic. Olympic owned three entities, the first of which covered manufacturing activities, the second is Namaafor development and real estate investment, and the third company is B-Tech. Electrolux bought the manufacturing activities. After Electrolux’s acquisition of, B-Tech proposed to buy B-Tech shares because Olympic owned a large proportion of B-Tech shares. Then B-Tech re-bought its shares again, and now it is owned by Kafela for Trade & Distribution, which is based in Egypt by 92% and the other 8% shares owned by the shareholders.

We demanded our willingness to be delisted from EGX, after we acquired our shares in B-Tech from Olympic and there was no need to be listed on the EGX.

How much is the company’s capital and the new investments?

The company’s capital is EGP 88.5m and we intend to increase the capital to EGP 250m-EGP 300m during this year – new investors will pump the new money in, and we are in the final phase of selecting these new financial institutions, which will be announced through this year. The new capital will be invested in new extended activities, opening new branches and develop our services centres.

How many branches does the company have?

We now have 62 branches, the latest one was opened a few days ago in Alexandria governorate and this year we intend to open another five branches in Alexandria, Sharqeya, Qaliubiya and Sharm El-Sheikh.

By the end of 2018, we plan to have 100 branches across Egypt. We have had great expansion in Alexandria as one of the active governorates. One of our branches in Alexandria is on an area of 3,200sqm, and we intend to increase branches extended on an area of 6,800sqm. Most of our branches are rented, as we prefer not to freeze our assets in purchasing land, but we always want capital that is managed in the business process. We are not a series of shops, we are holding company that owns many stores, we have three headquarters in Cairo, besides an academy for trainings for our employees and workers. We also have more than 54 maintenance service centres in the governorates.

What are the international companies you deal with and import from them?

We are considered the only distributor of products for some international companies such as Brown, Ariston Thermo Group, Craft, Babyliss, Hisense, Electrolux and one of Apple’s distributors. In retail activity, we work with Toshiba, Sharp, Mobinil, Universal, Olympic Electric, LG and Samsung.

Does B-Tech intend to establish its own plant to manufacturing home supplies?

No, we won’t because we strongly believe in specialisation, although we have potentials to establish such a factory. However, the strategy is cooperating with the manufacturing companies, which have experience and are professional in this industry to reach the top of the profit and benefit, especially since there are a large number of factories in Egypt in this field which actually don’t work to their full capacity.

In this regard, B-Tech signed a cooperation contract with Shams Industrial Co., to distribute home appliances. Hisense has 13 manufacturing facilities in China and several outside of China, namely in Hungary, South Africa, Egypt, Algeria and France.

How has the dollar exchange rate affected your company?

The dollar high prices affected us like other companies, represented in the high prices but the issue is in the procedures and instructions of banks, which delayed the banking transactions and credits opening. I understand that these procedures have been tightened to fight the black market and irregular companies, but also they affected the committed companies as the delay in opening credit affects and delays our investments and receiving the products from customs.

But we have the ability to deal with this challenge through preparation for this challenge, through good management to the delay time spent in the queue to open credits. Besides, the issue of taxes as the local companies investing in Egypt paid approximately 40% of its sales as taxes this year, which is too high. There is no clear plan for imposing a system for taxes as it decreased again before the Economic Summit in March to 22.5%, which is reflects instability in the investment environment.

How much your investment and revenues in the local market?

Our investment totalled about EGP 700m-EGP 800m and revenues amounted to EGP 60m.

How much does your bank deal with banking transactions and average of credit?

How many B-Tech customers are there?

How much the interest on the premiums?

The interest on the premiums differ from product to another and the period of premiums, which is considered between six months to 36 months, and its average is 15%.

How many local traders do you deal with?

We have business in the local market with 300 local traders.

How many employees does the company have?

We have 2,000 employees, including 1,000 workers in retail branches, 300 in storage, 200 in maintenance services centres employees and 500 employees in other functions.

Will the company expand in other countries?

The expanding plan is already being studied, especially after receiving offers and demand from some Arab countries like Saudi Arabia and Kuwait. But the company believes that the demand inside the local market is still there, so that we have first to meet the demand locally and then disseminate in the Arab market.