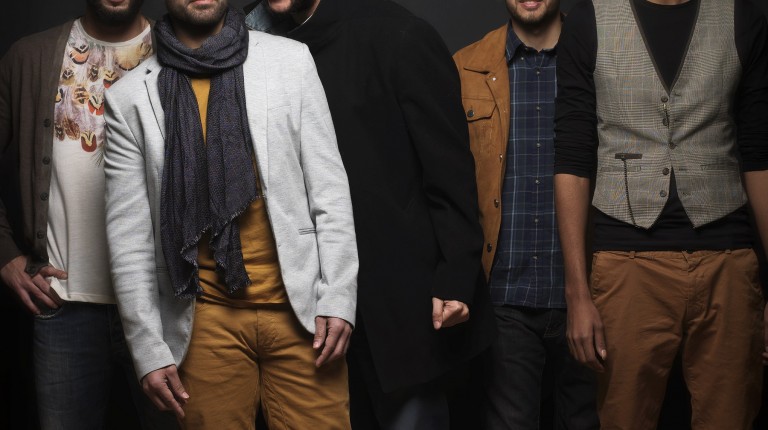 By Nayera Yasser and Nada Deyaa’

They are often called “the voice of the youth”. The tickets of any of their concerts are usually sold out weeks in advance, with hundreds of young people attending them, sometimes over and over again.  While their music loudly rocks the venue, the non-stop cheering and singing of the audience keep going as well. The minute the drummer starts playing, the jumping and screaming starts as well.

Cairokee is currently considered one of the most famous Egyptian bands in the Arab region. Their songs speak about the everyday real lives thousands of youth are living. With their suffering, dreams, sadness, hopes and beliefs, each song holds a new message from the heart of a life-changing generation to the out world.

Their “Sout El-Horreya” (The Voice of Freedom) and “Ya El-Midan” (Oh you, the Square) songs, were two of the most powerful, heart-touching songs, where they described the beliefs of the people towards the 25 January Revolution, and stated what people demanded in Tahrir Square.

“Ya-El-Midan” ranked number one on Facebook worldwide for downloads and number eight on YouTube, with more than half a million views on the video channel in just two days following its internet release.

Their legendary song “Ethbat Makanak” (Stand by Your Position), which happened to be released at the same time of the first clashes in Mohammed Mahmoud Street in 2011, is now considered one of the most politically-related powerful songs. As in the song, they ask people to insist on their rights and demands, and not to let go of them no matter how dark life gets.

Starting in 2003, with four albums, and currently releasing their fifth, Cairokee managed to speak the tongue of Egyptian youth out to the world.

The five member band sat with Daily News Egypt in an exclusive interview, talking about their new album, the restrictions they face, their political point of views and future plans.

First, tell us more about your new album “Nas w Nas” (People and Other People).

The album consists of 12 songs, 60% of the lyrics written by us as well as all the music and rhythms of the songs.

This album is being released less than a year after your previous one “El-Seka Shemal”, while you usually take a long time between each single – why is that?

We usually release an album each year, that’s the path we took for the past four years. However, there were some difficulties related to the production of our last album, that forced us to delay its release time. But now we’re back on track. Moreover, we usually have a big supply of ready songs; we constantly write and compose songs, so by the time of the recording and releasing, we’re only restricted with the financial issues.

If you have a big list of ready to be released songs, what are the criteria you decide which to be produced first on?

We decide upon the conditions we, as a country, are going through. For instance, a song like “The Television” was written in 2007. However, we felt it perfectly suits the current circumstances of the country, so we went for it, but added a few changes on the lyrics to perfectly match what’s happening.

You were usually known to speak the youths’ political point of view, especially the one’s whom have no political direction. Yet, most of the songs in the latest album don’t talk politics. Why?

We are not a “only singing for politics” band. Actually, we don’t sing about politics at all! All of our songs are about the social life and the struggles we face in our everyday life, we can’t control the way people see us. We sing for our rights, dreams and everything we constantly think about in our daily life, and those have nothing to do with politics.

But a song like “Ya El-Midan”, “Sout El-Horreya” and “Ethabat Makanal” are related to the revolution and political events happening in Egypt.

I don’t find the 25 January Revolution has anything to do with politics in the first place; we went down asking for social justice, freedom and bread. These demands are not political. Even in our songs, at “Sout El-Horreya” we sang for the feeling of freedom itself taking over people in the streets, even in “Ethbat Makanak” we talked about the sustaining on ethics. However, people tend to mould the songs in the frames of the events. It’s socially known that any song which is not about love, religion or nationality is political.

How do you find the political scene in Egypt nowadays?

Every one of us has his own political opinions. However, as a band we all support the human rights people demanded at the 25 January Revolution. Some of us believe that nowadays, you’re not allowed to say the truth. People are being misled or accused of disloyalty. The pure people who started the revolution are either imprisoned or forced into silence, each side uses the condition for its own good. We have no democracy in Egypt.

But the songs of the “Nas W Nas” album are not speaking the main theme young generations feel about Egypt nowadays.

We have to say that we have matured in the way of expressing ourselves. We changed and so have our thoughts and personalities. Yet, the first song in the album, “Walla Mana Ayez”, still features how some people now dream about the basics life requirements. In a song like “The Television”, we severely criticised the Egyptian media platforms and how they control the country. Moreover, we sang before about the feelings people have towards the country nowadays, anything further would be a form of repeating ourselves.

Did you have any fears that people might think you stayed away from discussing politics in your songs?

We say whatever we want to discuss in our songs with no boundaries or fears. That’s why we have                         some troubles with the censorship, as it doesn’t allow some of our songs. That’s what happened for a while with “Baka Baka” song. Some might think it’s a very light song and cheerful while its lyrics hold on the suffering our generation witnessed in the past four years.

As a band consisting of five people, how do you manage to end up unified over one decision?

We vote! When it comes to choosing the lyrics of the songs, usually we don’t disagree over the lyrics Amir writes. Otherwise, we talk about it and reach something in the middle.  Over all, we’ve been friends for over 10 years now, so currently we think pretty much like each other and the connection we share is one of a kind.

Was there any day you felt you might be banned from singing in Egypt?

Out of politics, who is the singer or band you want to have collaboration with after Aida El-Ayouby and Soa’ad Massy?

There’s no one specific by now. We tried to collaborate with Massar Egbari, but there was a difficulty of finding a suitable time together.

The language of this album is a bit bolder than the previous ones, why?

We only write the words we speak in our everyday life, we don’t come up with anything doesn’t already exist. As long as we’re not cursing, we’re not breaking any limits.

How do you fund your music?

We have our own production company, so as not to let anyone control the content we produce.  At first, we stayed for eight years working at other jobs to find the suitable funds, and then we started creating our own studio to save the money spent in renting a studio. The money we gain is only from our concerts and the ads we perform in, and we tend to do everything else ourselves.