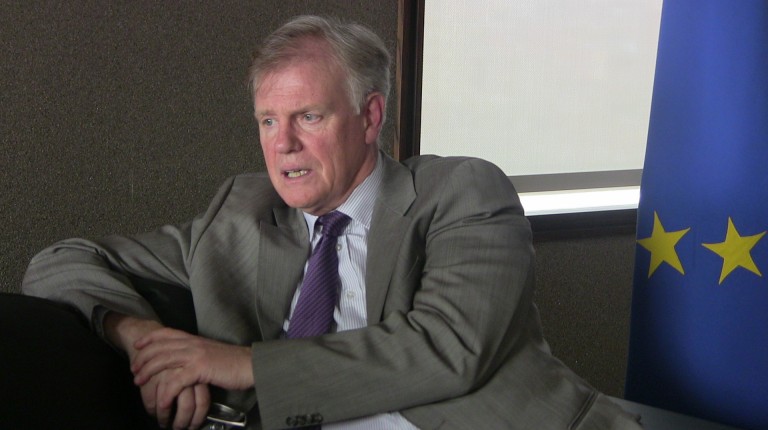 By Raghda Helal and Hosseny Hassan

In an interview with Daily News Egypt, European Union (EU) delegation head in Egypt Ambassador James Moran outlines the volume of trade between Egypt and the EU. Moran added that the EU is likely to send an expert team into Egypt for the parliamentary elections.

How do you currently see the Yemen crisis?

I am following it with concern, as Yemen is considered a very important country, and the instability in it will affect others and leads to the suffering of its citizens.

How could the Yemen crisis affect Egypt economically and politically?

Always when we have crisis, the whole region is affected in many ways. Economically, it is not good as it generally contributes to the atmosphere of instability and economic confidence – also, there are concerns about international trade. Politically, it affects the security and people’s wealth, as it will increase the percentage of refugees. We share Egypt’s concerns.

How could the Yemen crisis affect the abundance of foreign currency in Egypt and the country’s trade?

This is happening as we see; you have to be concerned with any consequences for free, fluent international trade. I think there are reasons to think it would not have a major effect, as there are many factors that will affect the currency abundance other than this crisis. I think that Egypt’s foreign reserves are the first thing to look at, and Egypt has good news considering the commitments from the Gulf countries. It is difficult to say what will happen, but I think that there are other factors that will affect the currency other than the Yemen crisis, including the economic performance, which is actually going in the right direction, as it was encouraging in the latest quarter, and the level of foreign reserves.

How do you see the situation in Arab countries, especially after the recent problems?

I am sure the Sharm El-Sheikh Economic Summit will have discussed all the problems  Arab countries are facing, and I think it will contribute solutions for those problems. I hope to see the outcome of the summit, as we support the political solutions. We are promoting the UN solution for Libya and in Syria. Just as, unfortunately, the conflict is still continuing, we support the political solution for these conflicts. The EU supports all the initiatives and efforts in finding solutions. We hope to contribute as much as we can in seeking the stability of the Yemen to help settle the problem.

What are your views on the GERD agreement?

I think that the issue of the [Grand Ethiopian] Renaissance Dam [GERD] was not managed well by previous governments, and it was problematic and was previously presented incorrectly to public opinion. Certainly, the agreement was a very good way for the three countries [Egypt, Ethiopia and Sudan] to work together. We support the technical solutions reached, with studies ongoing, we will wait and see their results.

What are your views on the development of “Islamic State” (IS) and its economic effect on Egypt?

With an emergency such as this, I think that this will affect any country economically, and it directly affects the people, as well as Sinai, from the security side. Economically, of course, it doesn’t help, but it was important for the Sharm El-Sheikh Economic Summit to have occurred. We are very hopeful because of the situation around the country, and the government’s commitments at the conference were a good sign, because it gave foreign, but above all the domestic, investor a good message regarding economic growth.

How do you see investors’ visions after the meetings the EU held at the Economic Summit?

I think the best thing is to look at the summit’s outcomes, as Egypt brought in about $35bn-$40bn in new foreign direct investments (FDI), most of them from European countries. The best message from the summit is that there will be commitments to Egypt in the future. You also saw the new grants and loans from European financing institutions like the European Investment Bank (EIB) and the European Bank for Reconstruction and Development (EBRD), which saw the finalisation of over $3bn in investments. This said “you can see the proof that the country is getting better in terms of confidence”.

What is Egypt’s investment climate likely to be after the summit?

It has been improving. We see that the new investment law is very important, and great effort has been made to carry out improvements in the situation. Having said that, we are still analysing the situation. Many, including the government, have said that there is still a lot of work to do. The new investment law is part of the general tidying up of the framework, but there are other aspects, such as the labour law and proper enforcement of laws, which are very important.

What is the Egyptian government’s main task after the signing of Memoranda of Understanding (MoUs) and agreements in Sharm El-Sheikh?

I think the main thing is to ensure things move rapidly and the finalisation of the agreements and their implementation are carried out quickly. The Sharm El-Sheikh summit helped in bringing in investors [to Egypt] again, and to have meetings on the table to move things forward, especially on the energy sector.

What is the total aid the EU has delivered to Egypt?

Over half the €5.5bn in aid that we announced in 2012 has already been delivered to the country. The current total amount of grant aid is under implementation across Egypt, and stands at €1.2bn for about 200 projects and programmes, most of which are to help the needy. There are also new announcements on the back of the Sharm El-Sheikh summit, during which the European Union and the government of Egypt signed a Memorandum of Understanding and Joint Declarations. These are to support social and economic development in Egypt, with a grant contribution of €130m. The EIB, which is the Bank of the European Union, signed a loan of €120m with the National Bank of Egypt (NBE), to support private sector companies in Egypt.

What is your comment on the IMF’s analysis of the Egyptian economy?

The IMF does a very great job on analysing the situation, particularly when talking about the gas and food subsidies. The previous subsidies weren’t benefiting the right people, but now thanks to the changes Egypt has made, the food subsidies are better directed at those who really need it. In terms of the fuel subsidy, the government is making considerable savings, whilst saying “we hope these savings will be used to increase expenditure on health and education and to social services, also already the government has plans especially after the constitutional commitment”.

In your opinion, how can Egypt face the worsening unemployment rate?

Well, there are efforts to support SMEs [small- and medium-sized enterprises]. I think that this sector presents an opportunity to increase the employment rate, and the support of it should be through training and financing.

What about your assessment of Egypt’s economic growth?

You can encourage growth, and this what the government is doing. However, you also need equity, as well ensuring that the benefits of growth are spread evenly over the population. This is related more to expenditure, to do more for SMEs, and make sure that the beneficiaries are feeling the benefits. Egypt’s baseline is very low compared to European countries, and the poverty rate is very high as it has reached 26%. A successful growth path alone will not bring growth, but figures can also bring reduction on the poverty rate.

What would be the political and economic effects of the delay on the parliamentary elections?

I think that on the economic side, we will watch closely as the country has many new commitments on the back of the Economic Summit. I am sure that it will see more of an economic recovery, although the elections will certainly help as they are the third and final piece in the roadmap. Many, including the EU, had clearly stated that they fully support the elections, saying: ‘You need a parliament as soon as possible, as there should be proper representation of the Egyptian people.’ We do understand the reasons for delaying the elections. Investors know that there are legislations that need the proper time for execution and they will come anyway, but others are waiting to see the situation clear up, and what the situation will be by the time elections are completed. We will send an expert team to monitor these elections, as we have already observed the presidential elections. We will send in a team for constitutional observation.

Do you expect that the dollar black market will return?

As the situation is now stable, there has been some work on this side and the foreign exchange reserves have become a lot better. This was especially so after the GCC promised aid during the Sharm El-Sheikh summit, which perhaps provides greater space for currencies.

Do you expect any further devaluation in the Egyptian pound?

No one can predict further devaluation, but the situation, as it looks at the moment, is stable.

What is the main economic challenge Egypt currently faces?

I think it is to get growth back to between 6%-7% again, so it will be growth for the many, not for the few.

In your opinion, how can Egypt achieve financial inclusion?

I think it will firstly be through ensuring support for SMEs, secondly through enhancing expenditure on basic services, especially on health and education, and finally through empowerment of the civil society.

What is the volume of trade between the EU and Egypt?

It is good, as it has increased by 11% in 2014 to reach €25.5bn. Egyptian exports and imports also went up. We believe that there ways to deepen the trade relations between EU and Egypt.