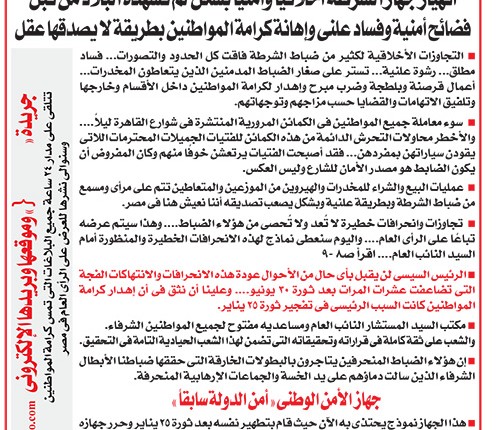 The Interior Ministry announced Sunday in a statement it ordered the arrest of a reporter at Al-Dostor newspaper.

The ministry statement said the journalist had been charged over a range of criminal offences from drug and weapons possession to theft, to forgery and bribery.

The ministry said Hussien Abdel Halim was arrested Saturday, “because he was charged in seven cases, some of which he was sentenced in”.

However, the different charges were allegedly for crimes committed between 2003 and 2013.

Abdel Halim has reported on alleged police violations against civilians in police stations, prisons, and at checkpoints. Abdel Halim argues that, due to his investigations, he discovered police officers sexually harassed women in road checkpoints, verbally assaulted civilians, and received bribes from drivers.

He also reported on “inhumane” conditions in Egyptian prisons, citing torture cases. In the report, Abdel Halim based his argument on the government-backed National Council for Human Rights (NCHR) report of the presence of violations against detainees.

The ministry added that Abdel Halim based his articles “on arguments and assumptions of which some are still being looked into by the prosecution. He aimed to distort the police institution among the public opinion, and neglect the accomplishments, as well as the fact that many police personnel have died to protect the homeland.”

The police also demanded the Egyptian press to “carefully choose their reporters”.

The privately owned Al-Dostor newspaper has been known to be supportive of the government, the Interior Ministry and the Prosecutor General.

However, since last week the newspaper has printed articles directly critical of the Egyptian police.

On the front page of its 8 April issue, the newspaper wrote that “such violations are being covered up by the current media center of the ministry”.