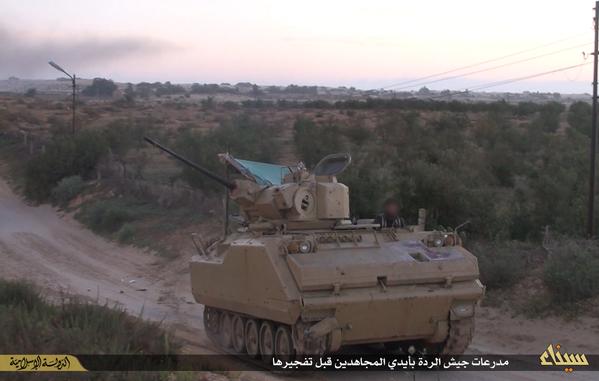 Civilians in North Sinai are caught up in the struggle between the Egyptian armed forces and the Islamic State (IS) affiliated group “State of Sinai”.

While it often remains unclear if civilian deaths are a result of army airstrikes or militant bombings, the number is on the rise.

April has seen a string of attacks on security personnel where civilian targets were also hit, the latest of which was on Sunday. Six individuals were killed and 20 others injured by a car bomb that targeted a police station in Al-Arish, a North Sinai resident told Daily News Egypt.

He said conflicting reports on more deaths are spreading, but it is unclear whether the numbers of victims announced include civilians.

The Ministry of Interior, for instance, released a statement saying that five policemen were killed in the attack. Furthermore, it said a conscript was shot dead Monday in northern Rafah.

The resident, who requested anonymity, added that several houses were damaged as a result of the explosion.

One of the two largest attacks in North Sinai occurred on 29 January. It targeted several security facilities in Al-Arish, Rafah and Sheikh Zuweid, leaving at least 30 security personnel dead and damaging residential areas in the vicinity of the targets. Many residents left the area in a state of panic following the attacks, local sources told Daily News Egypt.

The village of Qarm Al-Qawadis, which saw the second largest attack in October 2014, leaving also at least 30 personnel dead, witnessed a new attack on Sunday. “State of Sinai” claimed to have shot two mortar shells into a military base. Military spokesman Mohamed Samir announced the deaths of six army personnel and the injury of two others.

Two more policemen were killed on Wednesday after a bomb explosion targeted a security vehicle in the Masaeed area in Al-Arish.

Generally, attacks on security personnel have been on the rise since the ouster of former president Mohamed Morsi in 2013. President Abdel Fattah Al-Sisi’s government has responded with a “war on terrorism”, destroying tunnels and creating a buffer zone along the Gaza border to stop weapons trafficking and militants. However, the intensity of the insurgency has not weakened, and civilians have their share of deaths increasing amid the struggle between both sides.

On Saturday, the Sinai-based militant group “State of Sinai” claimed the killings of two people via a video featuring the decapitation of an individual, apparently a civilian, and the killing of conscript Ahmed Fathy Aboul Fotouh by gunshot. The conscript was kidnapped on 2 April, when “State of Sinai” claimed to have targeted seven military checkpoints, killing “tens” on the Al-Arish-Rafah international road and seized two military vehicles.

The attack left 16 armed forces’ personnel dead along with more than 10 civilians injured according to several news reports. However, the exact numbers were not confirmed. Two North Sinai sources noted as well the death of at least three civilians as a result of the attack.

“State of Sinai” normally kills civilians who they accuse of being armed forces “informers” by decapitation. In February, a video was released showing eight decapitations of civilians whose bodies were later found on North Sinai roads.

Civilian deaths occur despite alleged efforts to avoid this. However, the North Sinai resident previously told Daily News Egypt that civilian deaths are a daily occurrence. “It is not unusual to find a couple of civilians decapitated or shot on the roads of Al-Arish, Rafah and Sheikh Zuweid,” he said.

“State of Sinai” has reportedly been distributing leaflets over the past year threatening residents against “collaborating with the army”, while asking residents to join their side.

On the other hand, the armed group claims that their attacks against security targets are a “response” to the armed forces’ “indiscriminate shelling of Muslims”. “State of Sinai” repeatedly posts photos of dead people, blaming their deaths on army’s airstrikes in North Sinai.

The group also posted videos showing alleged civilians complaining against the destruction of their homes and blaming it on the armed forces operations.

The armed forces, on the other hand, stated in several statements that their operations target militants’ hideouts and headquarters by airstrikes with the aim of “eliminating terrorism”, denying repetitively hitting any civilian targets.

The army has targeted the Rafah area, specifically where the 5km buffer zone is being implemented. The area has been evacuated of all residents prior to the shelling, with the aim of destroying all the tunnels to Gaza.

In an effort to step up counterterrorism efforts, Al-Sisi maximised to life imprisonment on Sunday the penalty on those digging or using border tunnels. The severe penalty is imposed on whoever “digs, equips or uses a route or an underground tunnel with the purpose of communicating with a foreign state or any of its citizens”, or help individuals, goods, equipments or machines in and out of the country.

However, as the army has repeatedly announced a high percentage of tunnels have already been destroyed while the insurgency rages on, it is questionable if these efforts will hit the militants and spare civilians.