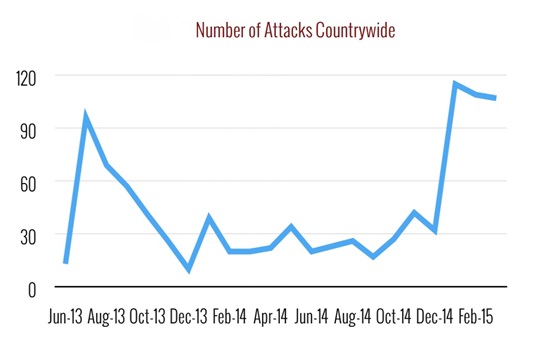 Terror attacks in Egypt are continuing to remain at a high rate throughout the first quarter of 2015, but the nature of the attacks and the groups responsible have changed since last year, according to new research.

Whilst the number of attacks in Egypt stood at 353 for the entirety of 2014, in the first three months alone the number has almost equalled the figure at 331. The new figures come from analysis by the Washington-based Tahrir Institute for Middle East Policy (TIMEP) and reflect other recent studies documenting a worsening of Egypt’s security.

In March alone 107 attacks took place across 21 of 27 provinces. The numbers appear to contradict a statement on Wednesday by Ministry of Interior spokesman Hany Abdel Latif in which he claimed that, whilst the war on terror has not yet ended, terrorism in Egypt has decreased 65% since “before”.

Asked about the apparent discrepancy between Latif’s statement and the new figures, a spokesperson from the interior ministry told Daily News Egypt that the 65% figure is measured “by the amount of successful operations and arrests to halt terrorists and attacks” in Egypt.

However, following an attack on Wednesday that killed two army cadets in Kafr Al-Sheikh, President Abdel Fattah Al-Sisi acknowledged in a speech that the number of attacks have increased recently. President Al-Sisi called the incidents “cowardly acts” and claimed that that those who lead such operations have no other means at their disposal.

With information from one single institution often seen as incomplete or inaccurate, TIMEP compiled its figures using sources including news reports, government statements, terror group statements, and other data.

The TIMEP report documents that attacks in North Sinai were at the lowest rate in four years, making up 17% of reported incidents, but TIMEP suggest that renewed attacks in the first half of April indicate this does not represent a new trend. Egypt’s most prominent militant group “State of Sinai” were however responsible for a highly coordinated attack on a military facility in Al-Arish, whereby water tanker carrying a large stock of explosives was driven in to the compound and claimed between upwards of five deaths, the group claimed “tens”.

With attacks by “State of Sinai” low, the Allied Popular Resistance Movement was responsible for a large proportion, at 32 incidents in March across the country. They are described as “a network of local actors, including locally-based Popular Resistance affiliate groups and the ‘Revolutionary Punishment’ group”, though it is unclear how cooperatively they operate. Ajnad Misr carried out only one attack in the month.

Despite the high rate of attacks, documented deaths are continuing on a decreasing trajectory, 27 deaths were reported in March compared to a previous average through the year of 32, attributed to an absence of any large-scale attacks. But injuries jumped from 75 in February to 135 in March.

The report also documents longer-term changes in the nature of attacks, with an overall increase on civilian targets, at 19 in the month with a figure of 16 dead. Whereas previously state personnel and facilities were overwhelming targeted, economic and property targets have continued to increase, with 34 attacks in March, predominately focused on banking and telecommunications sectors.

A lack of hard facts and media clarity is a theme within the latest research as the report observes that there are common discrepancies between government institutions and media reports on attacks and counter terrorism operations. For instance, they report that there were 255 operations in March overall, however official government sources only confirmed 161. Similarly, according to reports used, the large figure of 1,841 alleged terrorists were arrested in March, including 1,223 individuals accused of being members of the outlawed Muslim Brotherhood.

A similar report by the International Development Center (IDC) states at least 174 Egyptians were killed and over 600 injured in more than 1,000 violent incidents across Egypt during the first quarter of 2015. The IDC figures also include violence meted out by the state and suggest that 15.5% of violent incidents were due security forces’ brutality against citizens, such as during dispersal of protests. Their report concludes that one of the key causes behind the continuation of violence is ineffectiveness of the state’s security strategy, which partly pushes towards more violence, amid an absence of justice.