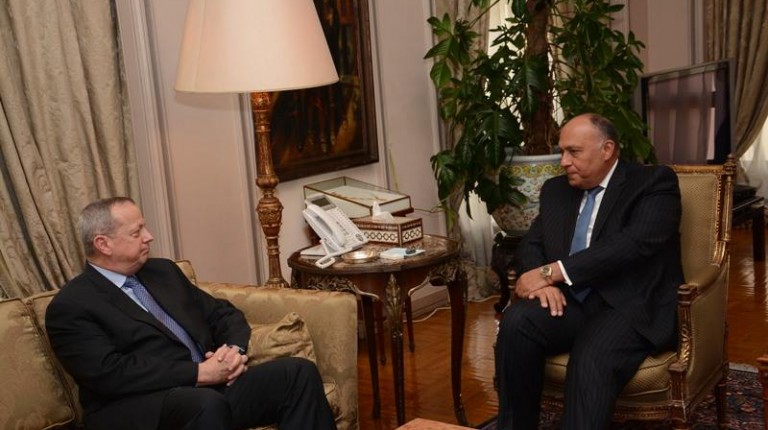 Egypt’s Foreign Minister Sameh Shoukry met Sunday the US special presidential envoy for the Global Coalition to Counter IS John Allen, discussing the cooperation within the coalition against the “Islamic State” (IS) terrorist group.

The meeting tackled the developments on the ground in Iraq seeking the defeat of the Islamist militants and “freeing the Iraqi land from their grasp”. Allen presented the recent field progress achieved by Iraqi forces.

Allen arrived to Cairo after participating in the East Asia Summit symposium on countering violent extremism in Singapore. His visit to Egypt also includes a meeting with Arab League Secretary General Nabil Al-Araby.

Shoukry reiterated the importance of concentrating the efforts of the coalition to extinguish the militant organisation.

He also highlighted the importance of the Iraqi government’s efforts to include all national political factions in the political process, regardless of racial, religious or sectarian affiliations.

Allen asserted that the continuous cooperation between the US administration and the Iraqi government comes in the framework of the global coalition to defeat IS and help provide security, protection and safe return for the Sunni Iraqis to the areas freed from IS.

Shoukry had previously expressed, following a meeting with his American counterpart John Kerry in February,  Egypt’s willingness to give all support to the global coalition against IS and other “terrorist organisations”.

Egypt is part of the US-led coalition that aims to “degrade and ultimately destroy [IS]”. The US, UK, and Gulf countries are carrying out airstrikes on the group in Iraq, while the US is also carrying out strikes against IS targets in Syria, supported by Jordan, Bahrain, Saudi Arabia, Qatar, and the UAE.

Egypt participated in a meeting in mid-October in the US, headed by US President Barack Obama, who stressed that there is no “quick fix” in the military and ideological fight against IS.