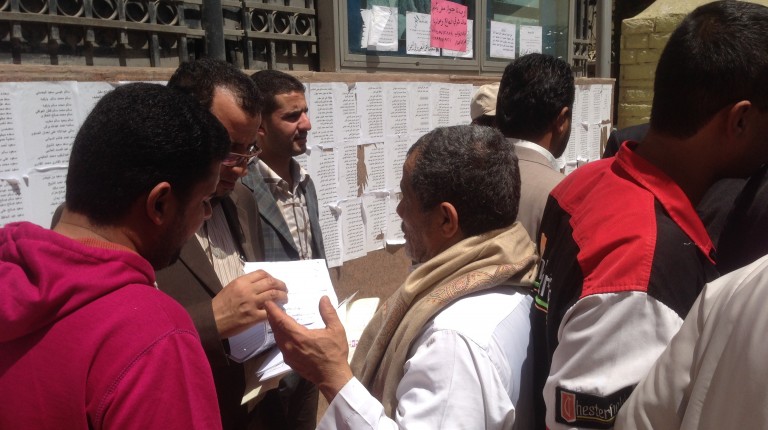 Yemenis in Egypt continue their struggle to return home, calling on the Egyptian Foreign Ministry Sunday to consider their case and deport them back to their homeland.

Daily News Egypt spoke with several Yemeni men standing in front of the embassy, as they voiced their demands and expressed their views regarding Operation

“We are considered refugees here, we’ve been staying in front of the embassy for almost a month. We call on the Foreign Ministry to consider our case and deport us to our country,” said one of the protesting Yemenis.

Another added: “We have been struggling for a month now; we don’t have any money left to pay for our apartments or to sustain ourselves. We want to leave.  The ambassador is not aware of our predicament and he doesn’t know how to deal with it.”

An old Yemeni man eager to voice his opinion also said: “We call on the Egyptian Foreign Ministry to treat us with mercy for we are brothers from one nation.”

“We’ve been here for months and we have our families with us. We finished our treatments and we are done,” and he added. “Our embassy is just pacifying us; we keep waiting but nothing happens.”

One of the Yemenis in favour of the airstrikes on Yemen told Daily News Egypt: “First of all, I would like to thank King Salman, the Saudi people and all the Gulf countries for Operation ‘Decisive Storm’ that targets the Houthis and people who are causing destruction in Yemen in general.”

However, other people standing around the man displayed clear objection to his view and attacked the man verbally and physically.

Meanwhile, Mohamed Ali held a completely opposing view regarding Operation ‘Decisive Storm’, saying: “We reject any form of aggression on our country; we reject the strikes by Al-Saud family. We are all Yemeni people; and we condemn the strikes on our country.”

The old Yemeni man further stated: “Al-Sisi is the leader of the Arab nations. He is capable of arranging our trip back to Yemen and we fully trust him to do so.”