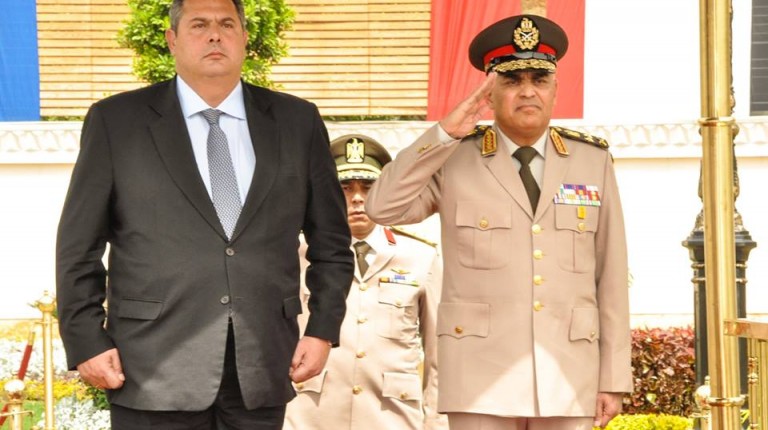 According to a Ministry of Defence statement, the ministers discussed the latest developments and changes in the region. They also discussed the possibilities to “enhance cooperation and military relations between the armed forces of both countries”.

Kammenos said that, as part of “strengthening the forces of stability” in the Middle East, military cooperation was of strategic importance for Greece. Sobhi emphasised the “well-established ties binding the two countries”, as well as his eagerness to further deepen the cooperation.

President Al-Sisi is to travel to Cyprus and Spain at the end of April, where he will attend a summit with the Greek Prime Minister Alexis Tzipras and Cypriot President Nikos Anastasiades. The meeting, which will take place in the Cypriot capital, Nicosia, is a follow-up to a 2014 meeting.

Kammenos is the founder and head of the Greek right-wing party ‘Independent Greeks’. He has been Greece’s Defence Minister since January, when his party entered a coalition with far left-wing party Syriza of Prime Minister Tzipras.

Despite the 2009 debt crisis, the Greek army was able to keep its size and its share of the Greek state budget. Greece still spends more on military than every other European country relative to its GDP.