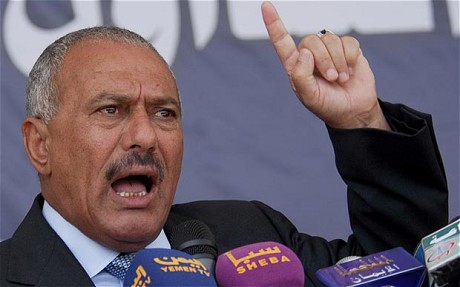 Former president of Yemen Ali Abdullah Saleh denied in a statement on his party’s website, Sunday, any involvement in the ongoing crisis in Yemen.

He stated that he had nothing to do with the army “after he handed over power peacefully in 2012”. He said that the accusations of his involvement only served to justify the “aggression on our country”.

He also expressed his willingness to deal with “the decisions of the international community to stop the aggression and cut the roads of the enemies” that he accused of trying to destroy the state institutions of Yemen, making it unclear to whom he was referring to as ‘enemies’.

Abdul Malik Al-Houthi, leader of the rebel movement currently in control of the capital Sana’a, on the other hand stated in a televised speech on Sunday evening that “the great Yemeni people will not give up” in the face of the “aggression”. He blames this on Saudi Arabia, the US and Israel. He accused Saudi Arabia of being “a servant of the American enemy and backing Israel”, while it is, according to Al-Houthi, the real threat to the national security of the Gulf countries and the two Holy Mosques.

Al-Houthi also condemned the Saudi-led intervention as a “violation of the sovereignty of a country”. He said the Saudi regime did not have any right to “interfere in internal affairs”, since it was up to the Yemeni people to decide the course of their country. He also accused Saudi Arabia of planning the invasion and occupation of Yemen, and “placing this country again under its feet”.

Further, Iran’s Supreme Leader Ayatollah Khamenei addressed the Yemen crisis on Sunday, claiming that, according to a report by semi-official Iranian news agency FARS, Iran “has not and will not interfere in other countries’ issues”. He warned that “the Saudis will definitely be struck in the back in this issue” and be defeated.

Is the situation on the ground swinging towards Hadi?

Meanwhile, the situation on the ground in Yemen could shift in favour of internationally-recognised Yemeni President Abdel Rabbuh Mansur Hadi, following the reported pledging of allegiance to Hadi by the commander of a northern military district along with his roughly 15,000 troops on Sunday. The move further placed large swathes of the Saudi-Yemen border under the control of Hadi loyalists.

That the security of the border is of foremost interest for Saudi Arabia became obvious again when a Saudi border guard was killed on Monday during an “infiltration attempt” by Houthi rebels, as reported by the Middle Eastern-based Levantine Group. According to differing reports, approximately a dozen Saudi soldiers, along with an unknown number of Houthis, were killed in cross-border clashes since the beginning of ‘Operation Decisive Storm’ in March.

Calls for a ceasefire remain unheard

Meanwhile, the international aid organisation Oxfam condemned on Sunday an air strike by the coalition that hit one of its storage facilities in northern Yemen, containing humanitarian supplies. Oxfam country director Grace Ommer stated on the official website that it is “an absolute outrage particularly when one considers that we have shared detailed information with the Coalition on the locations of our offices and storage facilities”.

Oxfam also joined calls by UN General Secretary Ban Ki-moon and others to halt the strikes, with Ommer calling for the parties to “find a negotiated peace and allow for humanitarian access”. Riyadh though has so far made minimal effort to reach a negotiated peace, and seems to be eager to improve the situation on the ground for the time being.

As the death toll among the civilian population of Yemen continued to rise, the calls for a ceasefire and peace negotiations grow more urgent, with at least another seven civilians having been killed on Monday when an air strike hit a Scud missile base near Sana’a.