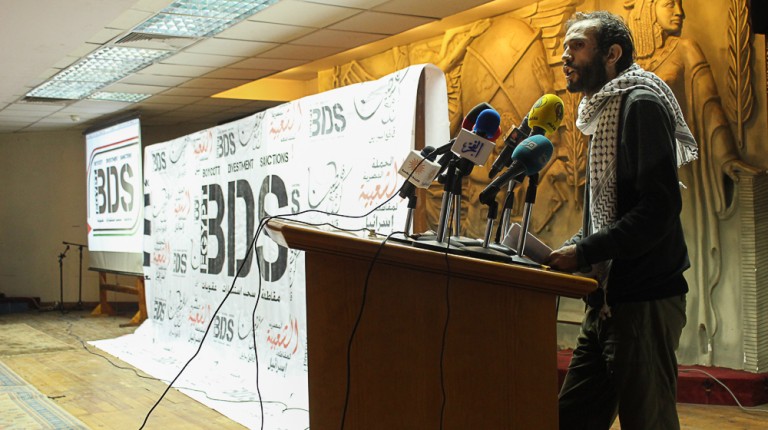 The conference was initially set to be inaugurated on 8 April, to commemorate the anniversary of the Bahr El-Baqar primary school massacre, where Israeli fighters attacked the school, leaving over 40 children dead.

The meeting, which was attended by prominent activist figures, was held at the Press Syndicate in Downtown Cairo.  The campaign aims to “redirect the political struggle of the Egyptian people to focus on the Palestinian cause and the Arab-Israeli conflict”.

Leftist activist Haytham Mohamadeen said the campaign is to diversify the methods of resisting the occupation in Palestine. “The purpose of BDS is to allow all Egyptians to participate in the movement,” he said.

“Previously, different boycott movements tried to convince the public not to buy some products that support the occupation. However, BDS will continue to be part of the existential struggle against Israel,” Mohamadeen said, adding that the campaign will also name the companies that are profiting from Egyptians and supporting the Israeli army at the same time.

The labour leader added that the majority of labour syndicates demand to pressure those companies to end all ties with Egypt.

This is not the first boycott movement to begin in Egypt. Since the signing of the peace treaty in 1979, different campaigns and mass protests have demanded the end of Egyptian ties with the Israeli state. Anti-Israeli protests were common in universities and syndicates.

Spokesperson of Al-Dostour party Khaled Daoud said in the conference that the BDS movement has achieved many successes in the West, especially in the field of academia in Europe and the United States.

Daoud cited different examples where the movement succeeded to convince investors and businessmen to halt cooperation with Israel.

“By forcing the boycotts and the divestments, we can force Israel to abide by International Law and the basic laws of Human Rights, in order to restore all the rights of the Palestinian people,” Daoud said.

He also called for boycotting Israeli products and halting their exchange in local and international markets.

The campaign’s objectives also include working to legally prosecute “war criminals” who committed violations against the Arab nations.

However, the organisers asserted that the campaign will not be dominated by a single political ideology, and that they welcome activists and citizens from all over the country to start their BDS campaigns.