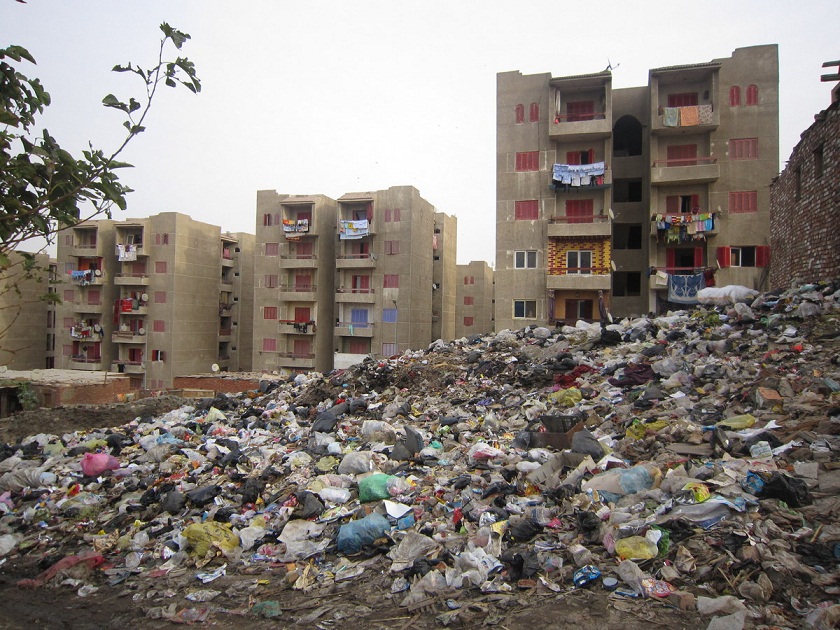 In the Old Cairo area of Magra Al-Oyoun, where leather tanning takes place, is one of the most famous industries in Egypt. Thousands of workers and citizens live in the area, and make a living there. In this industry, workers use many chemicals which cause skin diseases, burns, and extreme asphyxia for manufacturers during the cleaning and tanning of leather, and whilst putting the final touches to items to be sold on the market. Workers in this industry use neither gloves nor masks to keep out smells and chemical emissions from their work. Some workers in the industry, who may also suffer from lung and breathing problems, have had limbs, including arms, amputated after working with the machines used in the industry.

Abdel Mawla Fawzy, an owner of a Magra Al-Oyoun tannery, said that most tanneries use cheap equipment to lower the cost of the product. This also drives down the price, allowing them to sell their wares at a convenient price on the market, and to compete with the cheap manufactured leather.

This means that tanneries which offer products to the local market do not follow the specifications of leather manufacturing, which threatens workers’ health as well as that of consumers.

Kamal Mohamed, a leather broker in the area, said that the absence of insurance for most workers, and the dangers they face, makes it easier for the tannery owner to lay them off immediately. This also poses a threat to their families. One worker, for example, passed out while opening a barrel that contained chemical material. He was taken to a hospital that refused to admit him for treatment unless he paid EGP 500. This led his co-workers to move him to another public hospital.

Foundries, another widespread industry in Egypt, are also one of the most dangerous industries for Egyptian lives. They are spread around Qaliubiya and Cairo. Qaliubiya foundries are located in an area called Ezbet El-Saida. At the first instance of entering the area, a visitor will be bombarded with bizarre smells which makes it harder to breathe.

What is noticeable in the area is that most of its residents suffer from sever coughs and lung diseases, and one of its residents, Yassin Mohamed, confirms this story. Mohamed said that he and his children have breathing problems, especially his youngest daughter, who is four-years-old and suffers from a chronic cough where medications no longer have an effect.

The situation did not differ much in Tounsy Foundries in Cairo for metal smelting such as aluminium, copper, and cast iron. When you breathe, it feels like the last breath of your life, due to the severity and difficulty of the situation there. Workers in the workshops, as well as residents of the same areas, are constant visitors at healthcare providers, because of suffocation, difficulty in breathing and other chest complaints.

It is noticeable that the category most affected by the air and atmosphere in this area were the children, especially those of them who work in these foundries. Severe and continuous cough due to vapours and fumes resulting from smelting these metals are big problems.

The same diseases and almost the same health hazards are suffered by residents in the small villages that foster the most famous cement plants in Helwan. The roads, the walls, as well as the passers-by and the people on cafes and in the workshops are all covered in white cement dust, which is very evident on laundry hanging outside on the balconies, in addition to the stifling smells and fumes released from these plants. These areas have thousands of residents, all of whom suffer from the same health problems which the residents insist are a result of their daily exposure to dust of the precipitation of cement from these plants.

An employee in one of the cement plants in Kafr El-Elow, who preferred to remain anonymous, expressed his frustration at the failure of many services to workers. This is compared to cement plants located in the Mex area of Alexandria, which the employee said built a general hospital and a social club, and also offers meals and milk for children in the region.

Another hazardous activity on workers’ health is rubbish collection. Workers in this sector risk infectious diseases, cancer or hepatic inflammations as a result of their daily activity of collecting rubbish from all residential areas, institutions and entities. Of these, hospitals and clinics are the most dangerous, with their waste frequently including radioactive materials, heavy metals, and biomedical wastes which are the major source of all kinds of biological contamination from used syringes, bandages, blood bags, and others. These all have viruses and microbes of serious health dangers, both for workers in these hospitals and their collectors, especially if these medical establishments did not look to get rid of these wastes in a safe manner. All too frequently, entities leave medical waste out with the ordinary rubbish, which makes it easier for them to taken by sorters and rubbish collectors who collect without using gloves or any safe methods. This, in turn, makes them more prone to infectious diseases, hepatic diseases and AIDS.

Ministry starting operations of 5 tanneries end of May