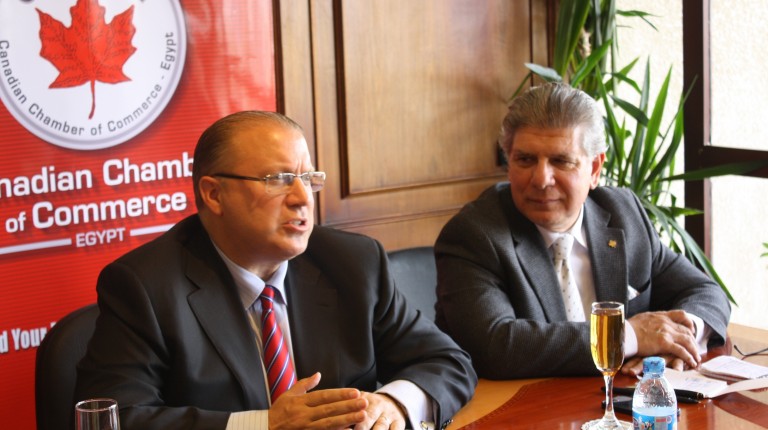 The total amount of recent agreements signed between the Canadian and Egyptian sides amount to $7bn, said the Canadian Ambassador to Egypt Troy Lulashnyk, Monday.

Lulashynk’s declarations came during his meeting with representatives from the Canadian Chamber of Commerce in Egypt, with the attendance of Fayez Ezzedlin, the chamber’s chairman.

The timeframe for injecting the aforementioned sum was not specified by Lulashnyk; however he noted that the Canadian companies pouring the investments are eager to start.

A Memorandum of Understanding (MoU) worth $5bn was also signed by Canada-based SkyPower, International Gulf Development (IGD) and the government of Egypt, on the sidelines of the Egypt Economic Development Conference (EEDC), held mid-March in Sharm El-Sheikh.

The agreement specifies that 3000 MW of solar power will be provided to Egypt. The commencement of the project in the commercial operation phases is expected to start in 2015.

Furthermore, Canada will provide a total of $10m over a two-year period. The amount will be used for supporting the World Food Programme’s School Feeding for Host Communities project in Egypt.

The target of the project is to provide access and increase retention rates for more than 195,000 Syrian refugee children and Egyptians, in public preschools and primary schools.

Lulashnyk expressed his support for the Egyptian government in its legislative reforms, and highlighted that Canada has been seeing improvements in the country’s investment climate, and that the security situation has stabilised.

Canada is interested in investing and providing its technical expertise in the fields of oil and gas, education, agriculture, and the health sector, amongst others, Lulashnyk pointed out.

Regarding Canadian investments in the mining sector, Lulashnyk said that they are low at the moment, and that Canadian companies working in this field are more focused on exploration and looking closely at available possibilities in that area.