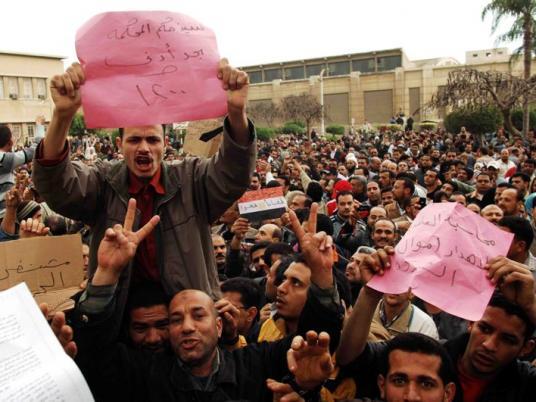 The High Administrative Court ruled Tuesday to force into retirement any employee charged of striking and “delaying the interests of the public”.

The court defined “striking” as any act of gathering by the workers, through which they halt all of the production process, while still being part of the workforce of the company or the institution.

The verdict is final, and cannot be challenged legally.

The court based its verdict on Islamic jurisprudence and the concept of benefit, arguing that if striking will harm the “clients of the institution”, it is not applicable with Islamic Sharia law.

The verdict comes one day after President Abdel Fattah Al-Sisi met with “workers’ representatives”, wherein he asserted the importance of production in the coming period. While delivering a speech in the heavily fortified Police Academy Monday, Al-Sisi said that citizens will start to benefit from the current developments in a matter of two years.

Commenting on using Islamic Law to rule in a civilian case, human rights lawyer at the Egyptian Centre for Economic and Social Rights (ECESR) Malek Adly told Daily News Egypt that “Islamic law has nothing to do with strikes”, adding that the verdict is “deeply flawed”.

This is not the first time where Islamic jurisprudence is used to criminalise striking. In 2012, while activists and civilian forces were planning major civil disobedience in defiance of the Supreme Council of the Armed Forces (SCAF), Dar Al-Ifta, the country’s foremost Sunni institution for issuing fatwas (religious edicts), argued that striking is forbidden.

However, it is the first time for a civilian court to cite Islamic interpretation to criminalise striking.

Adly added that the verdict is “political and has nothing to do with law”.

“The same court that in many cases rules in favour of the rights of the workers and labour rights issued this flawed verdict,” he added. “The parts which the court used to support the verdict are based on estimations.”

On Tuesday, the court also cited the International Covenant on Economic, Social and Cultural Rights, which former president Anwar Al-Sadat signed in 1981, arguing that an application of the covenant should be within the limits of Islamic law.

The court added that workers and employees are expected to obey their superiors in their work place.

Hamdy Hussien, a security general in the Egyptian Communist Party, told Daily News Egypt that although the decisions of the judiciary should be respected, “this verdict must be challenged”.

Further, Hussien thinks that the court might be biased towards businessmen, and demands that it should show more signs of fairness. He added that labour leaders should challenge this not only legally, but also by raising the awareness of fellow workers to know and understand the labour laws to “avoid being caught”.

Some workers demand more attention from factory owners to develop the process of production to enhance the reputation of the factory. “It is ridiculous to punish workers who want to improve their products. This law, if implemented, will allow business owners to fire skilled expensive labour and hire cheap workers, hence increasing their profits,” Hussien added.

Kareem Megahed, an economic researcher at the American University in Cairo, told Daily News Egypt that the verdict is a part of the state’s plan to silence all “potential dissent”.

“Currently, with the neo-liberal polices being applied in Egypt under the name of development, it is highly predictable that the main opposition to the regime will be the impoverished classes and workers,” he said.

The verdict also should be analysed within the series of policies the government is taking to attract investment at all costs, Megahed said.