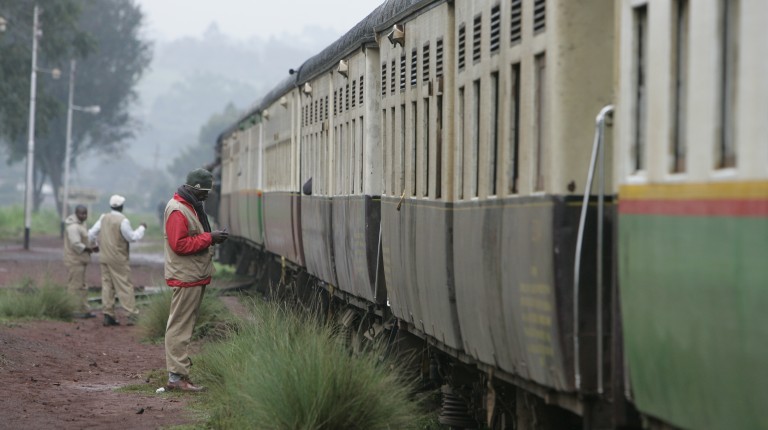 “Black Africa is yet to break forth”, a phrase used by Africans after imperialism and colonialism have plucked the continent for decades. However, after 40 years of stalemate, and with the resolution of the Nile water disagreement, African relations are significantly remerging on the Egyptian agenda.

“The [development] situation has changed,” Minister of Foreign Trade and Industry Mounir Fakhry Abdel Nour declared at a conference held in Cairo University on 21 April, entitled “Africa is Here”.

The conference was a starting point for strategic and social discussions between Egypt and African countries, Dean of the Political Science department at Cairo University Hala El-Saeed asserted.

How far Africa is on the development metre

The continent’s development rate is on the rise, from never exceeding 3% previously, to reaching 4% in 2014, said El-Saeed. “There is even a relative improvement in health conditions,” she added.

Abdel Nour praised the examples of successful economic management in Kenya and Tanzania. He added that Ethiopia alone sees economic growth of over 9% every year, “a number deserving of admiration”. Egypt’s current growth rate stands at 2%.

Political Science professor at Cairo University Hoorya Mogahed pointed out that 68% of Rwanda’s parliament is made up of women, the largest percentage of female representation in the world.

Conversely, researcher at the Arab and African Research Centre Mostafa Al-Gammal argued that Africa is suffering from a crushing economic crisis because of poverty and unemployment.

If Africa had a chance to shut itself off of the world, it would be self-sufficient enough to flourish, Al-Gammal confirmed. But no country is allowed to do so under the era of globalisation, or else a deliberate civil violence is created, and even military intervention might occur, the researcher said.

“The rates used represent growth, not development,” Al-Gammal said. “They are misleading.”

Capitalists and those affiliated with the government are the only classes that grew, while the poor became poorer, he said.

Also, the economies of countries with natural resources such as oil and copper, like Angola, have grown as a result of the increase of the prices of those resources, not real development, Al-Gammal explained.

Voting by foot, the presence of so much immigration vessels from Africa, is proof that the African economy is impaired, Al-Gammal said.

Al-Gammal added another factor, the Chinese side. “China, followed by India, has become the biggest investor in Africa in return for oil.” Some African countries, such as Sudan, have not collapsed because of Chinese presence in substitution of Western globalisation.

The history in “historical relations”: A short trek

Diplomats continuously emphasise the “depth of historical relations”, including President Abdel Fattah Al-Sisi during his speech in front of the Ethiopian parliament in March.

“We have not built on our relations enough,” Abdel Nour however stated.

Since the 1978 Camp David Accords between Egyptian President Anwar El-Sadat and Israel, relations with the anti-Israel African countries deteriorated.

Following an assassination attempt against toppled president Hosni Mubarak in 1995, relations were further damaged. Gunmen ambushed his motorcade as he arrived in Addis Ababa, Ethiopia, for a summit held by African leaders. Since then and all through Mubarak’s reign, Egypt did not attend any summits and turned against African countries.

“We are paying a high price for this remoteness,” Abdel Nour declared.

The Church of Ethiopia was part of the Church of Alexandria, until they split in 1959, when an agreement was reached between the Ethiopian Holy Synod and the Alexandrine. Egyptian Saint Frumentius (Abba Salama) became the first Bishop of Ethiopia, enthroned by the Pope of Alexandria around 325 C.E., and through him Christianity spread in Ethiopia.

Islam also spread in Africa with the help of Egypt, in particular through the south of Egypt to Sudan.

Khedive Ismail, the Khedive of Egypt and Sudan from 1863 to 1879, was the first to venture into discovering the Nile’s headwaters and assessing the areas. However, the excursion did not last for long once Britain colonised Egypt and removed him.  Britain also left the neighbouring countries divorced.

“Sudan has always been on the minds of Egyptian politicians,” Abdel Nour stated.

Egypt supported the independence movements in Africa following World War II, after they had been under control of Western European governments since 1905, except for Liberia and Ethiopia, which resisted Italian attempts of colonisation.

The one good policy during Mubarak’s rule was Egypt entering the Common Market for Eastern and Southern Africa (COMESA) in 1998, Abdel Nour said, adding that Egypt must build on this partnership.

The minister further referred to the one-year rule of the Muslim Brotherhood’s Mohamed Morsi as “bleak”, without further discussion.

A June 2013 meeting over the Grand Ethiopian Renaissance Dam (GERD) between political figures and Morsi had been aired without notifying those present. During the talks, Ayman Nour, as well as Al-Wasat Party Chairman Abu Elela Mady, suggested military action against Ethiopia to address the imminent issue of the GERD. Others talked about using actors and sports figures to negotiate, while Al-Azhar representative Sheikh Hassan Al-Shafei suggested embarrassing Ethiopia through international pressure.

Why Egypt is reintegrating

“Egypt belongs to Africa,” Abdel Nour said. There are strategic and security aspects, let alone the matter of water resources, he noted.

After years of diplomatic dispute over the 2011 GERD project, Al-Sisi signed a “good intentions” agreement in March, setting the principles of cooperation between the two downstream countries Egypt and Sudan, and upstream Ethiopia.

The Egyptian regime discovered that it has to have close relations with the continent, majorly for water interests, Al-Gammal said.

Diplomatically, Egypt would not want to lose the support of 54 voices in the UN, Al-Gammal further asserted.

“There are also some agriculture projects. But those are not reasons as important as water and support,” the researcher believes.

In contrast, the minister disclosed that economic measures come on top of all targets.

Egypt amidst the African economy: Present and future

“Economic integration is crucial for the implementation of the [African] peoples’ interests,” Abdel Nour believes.

Egypt’s exports to African countries do not exceed 17% of total exports, while its imports constitute a “scrawny” 1.6%, the trade minister said. Yet, Abdel Nour said he “does not lose hope at all”.

There are many promising sectors for export and import, Abdel Nour said, on top of which are food, chemicals, and building material.

The minster discussed Egypt’s import of grains, meat, coffee and other goods that should be developed to bridge the gap in Africa’s economy.

“The environment is set for the increase of trade and Egyptian investments,” Abdel Nour stated.

The minister announced the launching of two new major projects, the first being the completion of “the dream of linking Cairo to Cape Town” in two years, which would increase trade rates and decrease transportation costs. The second announcement was a Continental Free Trade agreement between 26 African countries, to be launched from Egypt in June, involving 60% of local production of 26 countries and 695 million consumers.

Abdel Nour also announced that the Egyptian advisory councils for African trade are to be restructured.

How to enhance Egyptian-African relations

On the political level, the Foreign Minister’s assistant for African Affairs, Sabry Magdy, believes that strong diplomatic representation is essential, as well as facilitating Al-Azhar and the Church to become key contributors to the process.

“We drink from the same Nile River water, which makes us live in harmony and cohesion, and I hope that these ancient relationships last forever,” Ethiopian Patriarch Mathias had said during his visit to Egypt in January, while negotiations over the GERD were on the table.

Magdy also advised increasing training rounds and research centres between African countries, besides giving more power to the women and youth of Africa.

Cultural synthesis significantly contributes to those relations as well. Eglal Raafat, another professor of Political Science at Cairo University, agrees with Magdy that there should be more scientific research facilities, pointing out the existence of only two centres at the moment.

Raafat holds that expeditions to African countries, including those from Al-Azhar, are in dire need of training and awareness of the countries they are sent to. The professor also recommended more student exchange, and translating African literature.

Mogahed highlighted the role the media and cinemas should play to aid the process.

Economically, Abdel Nour praised the African export-import bank, which provided $500m for trade among African countries. “It has a big but unseen role that must be recognised and worked on.”

The minister also praised the Al-Nasr for Exports and Imports Company, which previously aided the liberation movements and the development of economies, particularly in Algeria, Southern Yemen and many Arab and African states, until they gained independence. “It is now weak, but it should reclaim its political and economic role,” Abdel Nour said.

A third suggestion was leaning on the Arab Contractors Co., which has a hand in the Cairo to Cape Town railway route, as well as other economic activities in East and West Africa. The company announced early April the building of two projects in Ethiopia, with investments amounting to more than $111m.

The minister put forth that the African group should continue to assemble regularly and organise with the World Trade Organization and “protect the African economy from drowning because of developed countries”.

“Our destiny is together, either swim or drown together, and we chose to swim together,” Ethiopian Prime Minister Hailemariam Desalegn had said during the Egyptian Economic Development Conference in March – a sentiment perhaps echoed by Egypt’s recent moves.