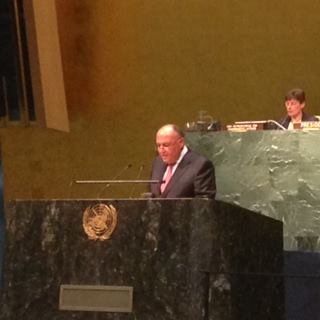 During the meeting with his Iranian counterpart, who is also the representative of the Non-Aligned Movement in which Egypt is a member state, Shoukry stressed the importance of “the principle of universality of the NPT”. This is likely a stab against Israel, which is among the few nations not having signed the NPT and is very likely to have a nuclear weapons arsenal, even though it has never denied nor confirmed it.

According to Foreign Ministry Spokesperson Badr Abdelatty, Shoukry pushed “towards the establishment of a Nuclear Weapons Free Zone (NWFZ) in the Middle East”, which had first been proposed by Iran and Egypt in 1974. He also emphasised the need to “deal with the necessary seriousness […] with the three pillars of the treaty”, including disarmament, non-proliferation and the peaceful use of nuclear energy.

Other sideline meetings included a meeting with the Chairman of Commission II of the Conference and Joyce Anelay, British Minister of State of the Foreign and Commonwealth Office. During both meetings, Shoukry reiterated his demands for a NWFZ in the Middle East and the promotion of the three pillars of the NPT.