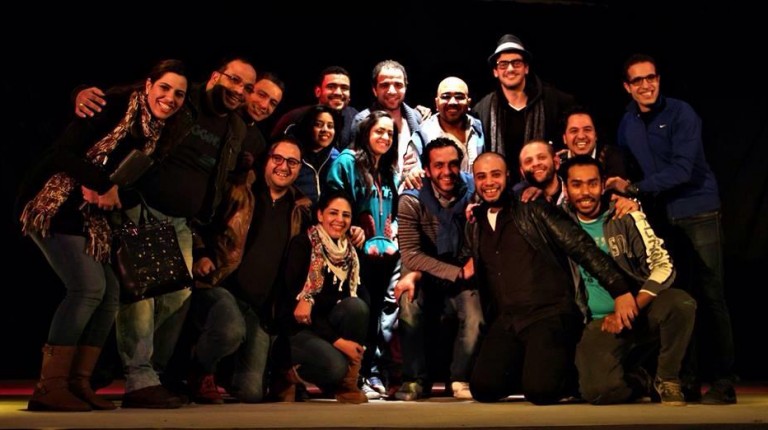 A theatre full of eager people waiting for the play to start, the flashes from cameras produces light enough to make your eyes keep blinking, and laughter is all what anyone can hear and feel while attending the play ‘1980 and upwards’.

The play is currently shown at Hosspair Theatre, near down town. It gained a lot of publicity, due to the way it discusses political issues in Egypt. The play takes the audience from laughter to tears then back to laughter within a few minutes, and that’s the geniality of its writer.

Mahmoud Gamal, the play’s 30-year-old writer, also acts in it. He sat with Daily News Egypt to talk about the details of the play and the background of its scenes.

Can you give us a little background about yourself and your studies?

I graduated from the Faculty of Commerce at Ain Shams University. As a student, I joined the acting team and this is when I started writing plays. I received positive feedback on my first play which encouraged me to continue. I have written nearly 26 plays so far. I received several awards such as the State Incentive Award for my play titled “We’re writing a new constitution”, as well as the Egyptian National Theatre Festival, in addition to awards by local universities. I used different language styles, using formal and slang. I also varied between continuous drama style and separate sketches.

Have all your plays been performed?

Most of them yes, and some of them more than once, nearly six or seven times. Some of my plays have also been adapted by others without  my permission, although I don’t mind. It happens in theatre, especially with well-known plays that have been published, as it becomes identified whose play it is. My plays are not really spread out in books, but they circulate.

Let’s talk about ‘1980 and upwards’. How was the play born three years ago?

Well, our group sat together with the purpose of coming out with an idea for a play. We found that the thing we mostly have in common is our age range, which is the generation that was born in 1980 onwards. The play has a political perspective, because politics is a major part of that generation, along with our dreams, our problems. A scene in the play, where a sales representative was trying to sell toothbrushes to people on the street, was inspired by a true event. We all work as sales representatives one way or another, with differences in income. We all worry about having to buy apartments to get married, our hopes that got lost, the things we wish to fight for and achieve, the revolution that went in vain, our friends that die all the time, this feeling that we grew old…

The play focuses on the idea of a young graduate who is caught up in the difficulties of life, as if there is no time for us to enjoy life. They are not the problem of our generation only, but the difference with ours is that we witnessed a revolution when we were young, we saw the introduction and development of technologies and how our societies changed accordingly, and how drama and cinema changed as well. Before, a story about a lost boy trying to get home was interesting, today mobile phones killed that part of the drama. And now the younger generation is also different from us, because these things were already there when they were born. We are a generation who learnt to freely speak politics on the Internet.

You say these problems date from older generations. One of the scenes of the play is set very far in the future, and it involves two young men discussing the exact same type of problems we currently face, including that the revolution has not achieved its demands yet. Do you see that there is no hope for any changes?

Well, I learnt that in order to understand the future, you have to take into consideration the past. Our generation’s problems have not remained unsolved for hundreds of years in our country. Definitely, they will not be resolved.

But the play spreads hope…

You know hope is self-generated. When you are hopeful and decide to send out positive vibes to the people around you, hope will survive. However, not all people think like that and I don’t think that the general feeling floating in our society nowadays is very hopeful.

How are you and the group able to portray tragic and painful events with a combination of comedy and drama, especially that you include events as recent as the unfortunate Air Defence Stadium incidents?

It all comes down to the fact that we are down to earth, and not contained in a bubble when we work. We know that our audience is made of people who look, think and feel like us. As a result, we feel them as well, it’s mutual; we are each other’s mirror in some way. Our purpose is not to throw out some jokes; our purpose is to highlight the irony of what has become the norm today. We mock the events that we do not find rational. People laugh at the reality they are living.

What about critique to your work?

For this show, most critiques I received were good. On very rare occasions, some said they did not like it that much, because they have an opinion that the play is too dramatic. I have heard things like: “You don’t think anything good at all is happening to this country.” Mostly, the comments are about the ideas and not the performance or the details of the play itself. But no harsh criticism, thank God.

So again,  is there hope for this country’s youth?

I personally think there is, I just don’t think everybody sees that. We hope that the young who come see us grab that hope, or else what would be the point of even staying here? I have faith in the youth that they can pursue their dreams, and that they are capable of change.

Let me tell you something, even for us, the play and its content was hard. At some point, even performing it was painful for us, mainly because they are inspired by true sad events. Yet, when the audience expanded, we were positively affected; the young who watch us boosted our hopes.