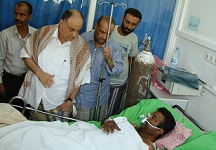 The Yemeni health system “is struggling to cope” after over a month of Saudi-led airstrikes, the International Committee of the Red Cross said on Thursday.

The ICRC added that their surgical team and all the local staff and patients were “forced to evacuate” Aden’s Al Jamhouria hospital after it became “a front line in the fighting”.

On 21 April, the Saudi-led coalition announced the end of its “Operation Decisive Storm” and the beginning of what it termed “Operation Restoring Hope”.

Days after the end of the operation was announced, the situation on the ground remained largely the same as heavy airstrikes continued in Sana’a and naval forces continued to shell Aden.

According to the World Health Organization’s statistics, fighting in Yemen has left at least 1,250 people killed, and over 5,000 injured. Statistics are collected from health facilities in Yemen, and because many are only partially functioning it is likely that the tolls are higher.

The fighting also led to “severe shortages of essential items especially food and fuel”, as well as water and electricity shortages.

The Head of Al Kuwait Hospital in Sana’a, Issa Alzubh, said that the hospital has been facing “tremendous logistical difficulties” in maintaining its presence.

“We are running out of diesel. Our ambulances can no longer transport patients. Only half of our staff can come to work as the hospital buses have stopped running,” Alzubh added.

Import restrictions have made the situation worse, the ICRC said. According to Zine El Abidine, a senior doctor at the Al Kuwait Hospital’s emergency unit, the lack of essential imports has caused severe shortages in lifesaving supplies in hospitals.

“We used to have our own oxygen factory, but now production has stopped as maintenance and spare parts can no longer be brought in. So now we are relying on oxygen cylinders from outside. And when they run out, then what?,” El Abidine said.