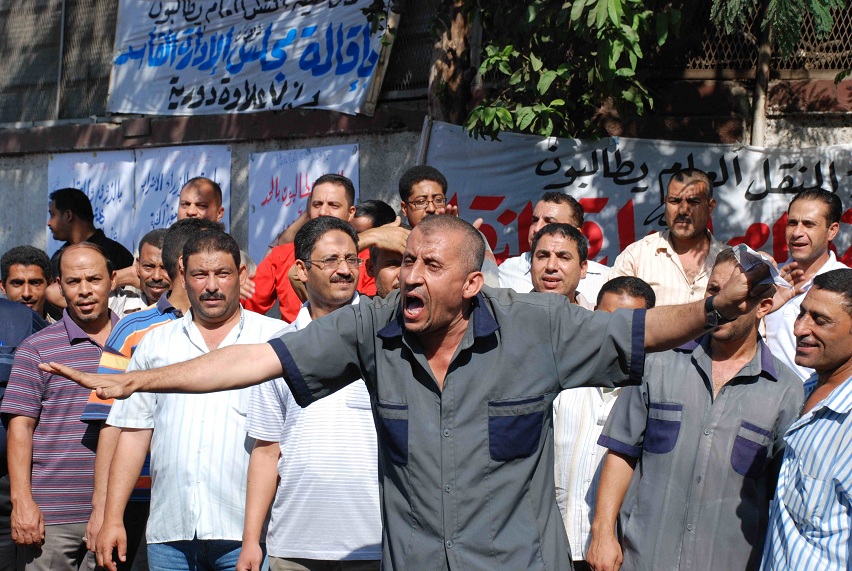 This year’s Labour Day witnessed a lower activist turnout as a number of labour movements failed to mobilise in the streets, amid heavy security presence.

Although the official 27 April celebration of Labour Day, in the presence of President Abdel Fattah Al-Sisi and leaders of the government-controlled syndicates, took place according to plan, the Egyptian workers’ movement in Egypt is still suffering from restrictive measures, whether legally or by force.

The Revolutionary Alternative, a group with anti-government leftist inclinations, was set to organise a protest on 1 May in Downtown Cairo’s Talaat Harb Square. However, due to the heavy presence of riot police and informers, “we were not able to gather striking workers in different companies and factories, and the protest was transferred in front of the Press Syndicate”, a group member told Daily News Egypt.

However, some of the group’s youth, along with other members of leftist parties, decided to organise a flash protest in the square, leading to the arrest of five protesters. They are yet to be referred to the prosecution.

In front of the syndicate, the group distributed flyers and chanted against what they described as “the military capitalist regime”, condemning the latest decision by the High Administrative Court to force striking workers into retirement.

The decision, which cannot be challenged legally, defined “striking” as any act of gathering by the workers, through which they halt all of the production process, while still being part of the workforce of the company or the institution.

The verdict, which came one day after Al-Sisi’s meeting with “workers’ representatives”, in the heavily fortified Police Academy, was heavily criticised by local human rights groups Friday.

The groups said that Prime Minister Ibrahim Mehleb met with labour groups to “prevent striking, and that Egyptian Trade Union Federation (ETUF) presented a workers ‘code of conduct’.” The code says the ETUF refuses strikes, and instead commits itself to “dialogue with the government and business owners as a mechanism to achieve social justice”.

The signatory groups include the Egyptian Initiative for Personal Rights, the Egyptian Centre for Economic and Social Rights, Nazra for Feminist Studies, the Hisham Mubarak Law Centre, El Nadeem Centre for Rehabilitation of Victims of Violence, and others.

They added in a statement that the law “mixed between concepts of protesting, striking, and occupying workplaces”, which is likely to narrow the public and political sphere. They also asserted that they will take all the legal measures to ensure the “right to strike”.